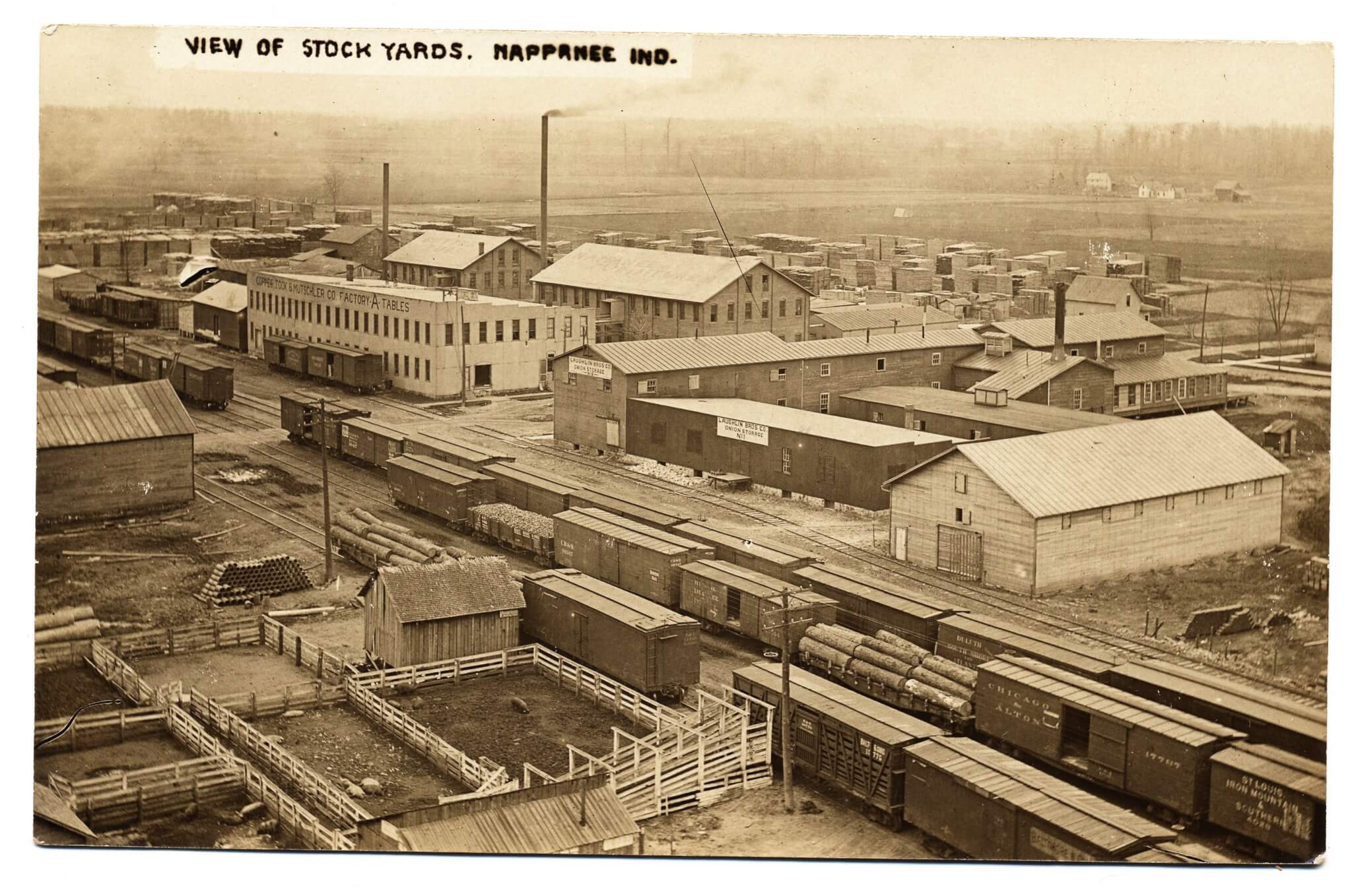 Today we are looking at a vintage picture of the factory area that surrounded the Nappanee Furniture Co., later the Coppes, Zook & Mutschler Co. building A, and still later the Mutschler Brothers Co. I love looking at these old pictures with a powerful magnifying glass to see all the details. If you can enlarge the photo, you will see the name on the building closest to the tracks. This building is still at this location but now it has red steel siding covering the exterior.   At the time of this picture, there was also a train track spur along the building to make loading easier. Notice how busy the train tracks are. Looks like all these train cars stationary and are off the main line, which could mean each car is doing business with a company in Nappanee.  Some logs on train cars were likely destined for the Coppes sawmill, and at least one animal stock car is at the loading ramp at the stock yard pens. Several freight cars were possibly for the Coppes, Zook & Mutschler Co. for shipping kitchen cabinets and other furniture to far-away customers. This many train cars gives the impression of a very busy Nappanee.

During the partnership period from 1903 through 1913, these factory buildings were called “C, Z & M Co. Building A”. Having the different building sets named with letters allowed for less confusion. For example, instead of someone saying “take this load over to the big factory” which might cause confusion,  they could have said “Take this load to factory A” and that would have eliminated any confusion and unwanted mistakes.  The brick factory buildings that are now the Coppes Commons Buildings was “Factory B” and the one-story tin building that was (now, no longer there) behind “factory B” was “factory C”. Finally, the sawmill was named “Factory D”.

Other interesting parts of this photo are the stockyards at the center bottom and the Laughlin Bros Co. Onion Storage No. 1 and Onion Storage No. 2 buildings. The roof of the original Nappanee Furniture building has the name on the roof with either different color roof shingles or it is painted on. The building behind the original Nappanee furniture Co. building is the Uline Company building. Very difficult to see, but the words “Butter Tubs” is Painted (or shingled) on the roof of this building.

Behind all of these buildings are huge piles of lumber that is air drying. This is the lumber storage area for the Coppes Bros. and Zook sawmill. If you can zoom in well enough you can see a wagon and men working at one of the stacks directly behind the brick building of “Factory A”. The pile of lumber is more than 2 times as tall as the men. Behind the piles of lumber is farmland.  The whole area that now encompasses Nappanee South of the tracks was still a very rural area when this picture was shot.

Has anyone thought about how or where this picture was shot? I don’t think drones were available back then. This picture was taken from the highest structure in Nappanee, by a photographer using a 1910 era camera and tripod while standing on the walkway of the Nappanee water tower.