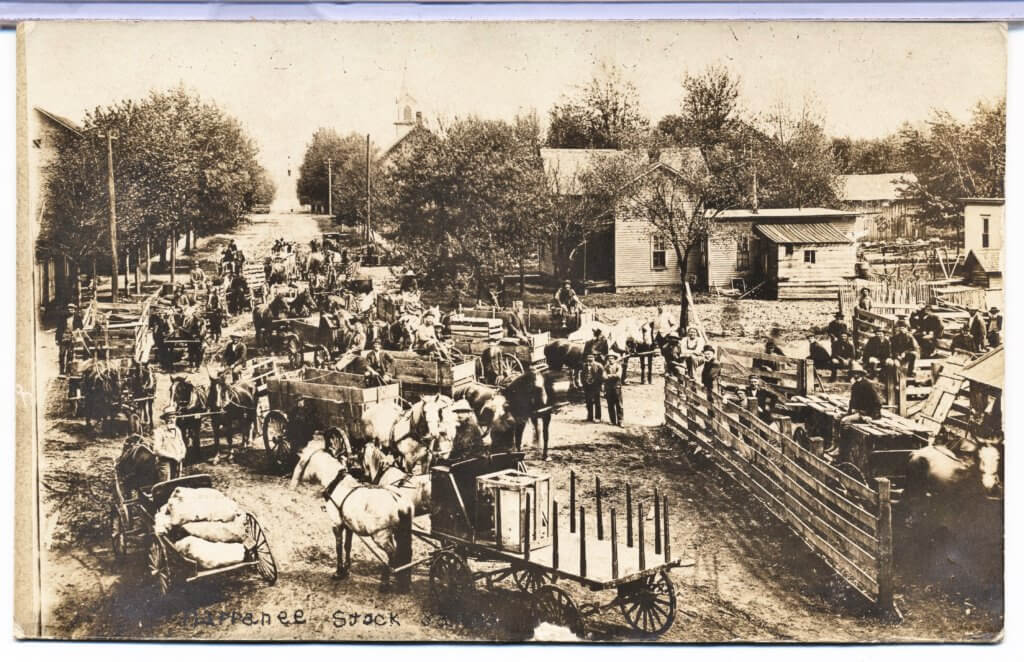 What a busy place on this day! It may have been some type of special market day or maybe this was the normal amount of activity in early Nappanee – lots of farm wagons bringing livestock to the stock yards for sale. As you can see, the fenced in area on the right side of this photo is the unloading pen. One wagon after another would pull into the pen and unload. Notice that some of the wagons have what appears to be a smaller box pen in the back of the wagons while other wagons have boards across the top, apparently to keep the animals from escaping. I’m guessing, because of my many months on a farm, that the majority of animals being brought to market this day are likely pigs. Although, I can see after an enlargement of the picture, sheep in one wagon and a calf in another.

I think that the camera man was standing on top of a train car that sat on one of the side tracks. Almost every person in the picture is posed, as if the picture taking process does not happen often. The wagon in the bottom center of the photo looks like a freight wagon, certainly not a farm wagon. How he became in that position is fun to speculate about. Did he arrive early and then get caught in the traffic jam, or is he attempting to send his crate on the train? The overloaded wagon in the lower left is also a puzzle. Looks like the wheels are going to fold in because of the weight in the wagon. What does he have in his wagon? Can you find the boy on a bicycle?

This location is at the South end of Elm Street at the Rail Road tracks, looking North toward Lincoln Street and East Market Street. The farthest-away horses are close to standing on Lincoln Street. The church steeple at the top is an early church on the corner of Elm & East Market St. where the Calvary Baptist Church is now located. Another clue to the date of this photo is the street light at the corner of Elm and East Market Street. Do you know when Nappanee put up street lights? Also, I’m not sure (the trees may be in the way) but I don’t see any large two-story buildings on the West (left) side of Elm street that could be the Coppes Hotel. Samuel Coppes left the Coppes Brothers Company in 1890 for other business enterprises, one of which was the Coppes Hotel which he had built in 1891. This picture must be before 1891.

This raises another question in my brain: what is the oldest picture taken of a building, a location or person in Nappanee? Do you have an early Nappanee photograph you would be willing to share with everyone? There are several very early reprinted photographs in the Nappanee centennial book They Called it Nappanee.  If you have not seen this book, the Nappanee Library has a copy in the historical section. I learned a lot from reading it.