I don’t know about you, but I love old pictures. I guess that is the reason you see so many in the history Corner. I keep thinking of the old saying, “a picture is worth a thousand words.” Today I have four pictures for you to look at. Maybe you will see some detail I missed. We have already looked at pictures of the East side of South Main Street. Today I am showing the West side of South Main. South Main has always been the heart of the retail center of Nappanee. I’m not going to even try to name all the different stores and businesses that were located on South Main. The pictures I have to show you span approximately 50 years. Starting with a picture from the Book “THEY CALLED IT NAPPANEE, A HISTORY 1884-1974.” This is a great book put out to celebrate Nappanee’s centennial. I know that I have learned a lot reading this book.

The first picture has the title, Nappanee, 1878. 1878 is just a couple of years after the town was platted. This picture has the camera pointing north looking at the buildings on the west side of Main Street and the intersection of what is now Market and Main Streets. Porter’s Saloon is the large building on the northwest corner. Notice the outside stairway leading to the “Auditorium”.  This building has had many different businesses located inside. Hardware stores, (someday I want to do a study about Nappanee’s various hardware stores) this saloon, a public school, and a place for stage shows. Along South Mai,n the first building next to the intersection was originally the shoe and broom shop of Dan Metzler. In this picture you can make out the “DRUG STORE” sign under the covered walkway. This drug store was the business of a Mr. Lake who moved his store inventory from Locke to Nappanee. Dan Metzler was one of the three neighbors that platted the town on Dec. 12, 1874. His “Broom shop” was the first shop/store in the area that would become Nappanee. 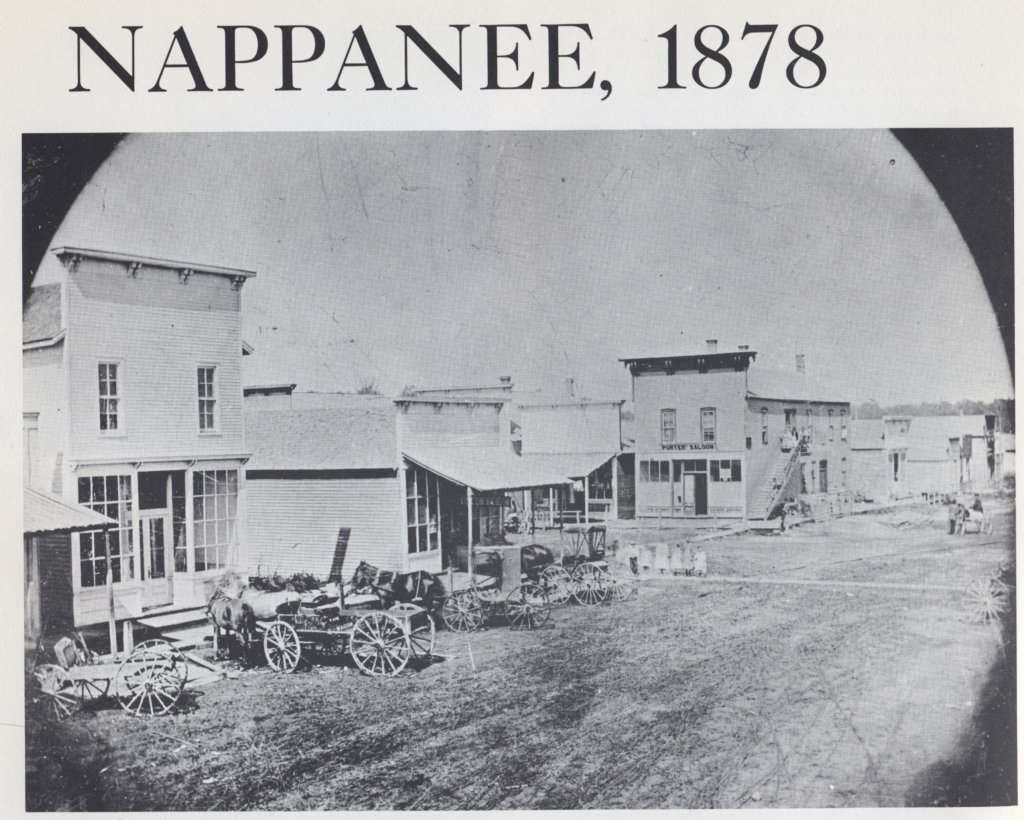 Next to the broom shop is an empty lot. I will be talking about this location later. The next building appears to be empty but would make a very nice general store for someone. Notice the buggies in the street and the five little girls and one boy standing on the boardwalk, keeping perfectly still to have their images recorded in this historic photo. 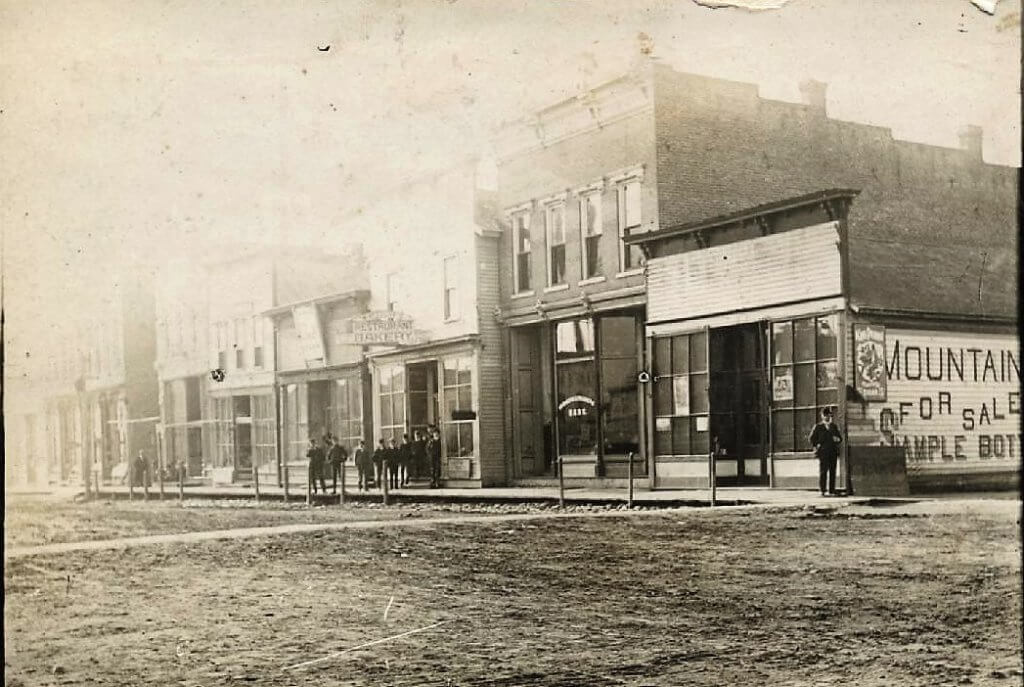 Picture number two is also of South Main but from a different direction. You’ll notice that now the cameras is located in the intersection and is pointing more to the south and we can see all the buildings in the first half block. Again, we have a number of people, men or boys this time, lined up for their 15 minutes of fame in front of the building that has a “Restaurant – BAKERY” sign out front. Too bad they didn’t tell the photographer their names. Any guesses as to the word following MOUNTAIN ________? Could it have been “Tonic,” As in Mountain Tonic – For Sale here – sample bottle free. I’m thinking that we will never know, unless the newspaper had started by the time this picture was taken and the store did some advertising. The Nappanee Weekly News was first published on March 27, 1879, so maybe there is a chance we could find out.

The empty lot that I mentioned in picture one is now the FARMERS & TRADERS BANK. This is the first version of the building, not what we know today. In approximately 1917 a new stone front with columns was added. This bank is the one that Samuel Coppes purchased in March, 1891 after he left the Coppes Brothers partnership company. Samuel purchased the bank from Mr. Daniel Bechtel and Son. I don’t think I have ever thought of it before this, but what do you actually purchase when you purchase a bank? Does the purchaser get the building & solid contents, along with the bank’s name and reputation? What about the customers’ accounts, and the safe deposit boxes?

What is your guess as to the time of the year that this picture was shot? About the only indicators I can see are the clothing being worn and the condition of the dirt in the street. What do you see?

Picture number three is a postcard with the title “SOUTH MAIN STREET, NAPPANEE, IND.” A whole lot of construction has taken place on South Main Street. This is after 1917, because of the new bank front, but also notice the new brick building on the corner. Most everyone knows this building as JOHNSON’S DRUG STORE.

An item in the Dec. 23, 1908, Nappanee Weekly News has this title, “FIRST TO OCCUPY NEW BUILDINGS. COPPES PHARMACY OPENS DECEMBER 31. AN EXTRA FIND OUTFIT.” It seems that John Coppes built this building with the intention that his son Marvin would operate it in a positive manner. Marvin Coppes had recently graduated from Purdue with a business degree. The newspaper goes on to describe the building’s fine interior woodwork and fixtures being manufactured by the workmen at Coppes, Zook & Mutschler. Also, the door with “side panels and fancy lamps shades” were mfg. by the Geo. L. lamb factory.

Beyond the bank building in what were four separate buildings, there is now one brick exterior covering the fronts of all of them. Beyond the alley is the Hartman’s store. Please notice that at this late date there were still railings to tether horses and not automobile parking spaces. 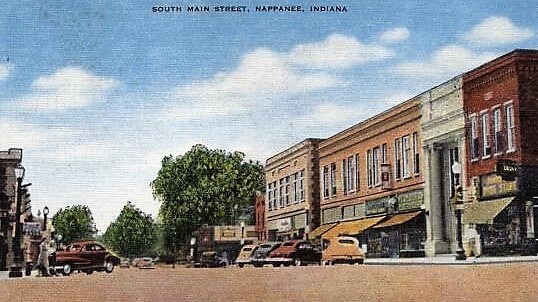 Here is another picture (color) postcard of the same South Main St., likely from the 1940s by the shape of the cars. Not much has changed with the buildings. The greatest change is because of the automobiles. New sidewalks with car parking and street lights to make it convenient for customers to get into the stores and buy something.