First thing, I want to tell you my current Motto, which I’ve borrowed from a You Tube video. The video features Knight Foundry, A Historic Water powered belt-Driven Machine Shop in Sutter Creek, CA.  At the end of the video they flash on the screen this saying which I’ve adopted. “HISTORY MAKES YOU SMART— HERITAGE MAKES YOU PROUD.” There are a lot of neat things on YouTube, also some stupid things. I would recommend watching this one if you like early machinery.

I want to start by thanking Dan Blucker (hope I have the name correct) for sending a great picture for us to use in the History Corner. 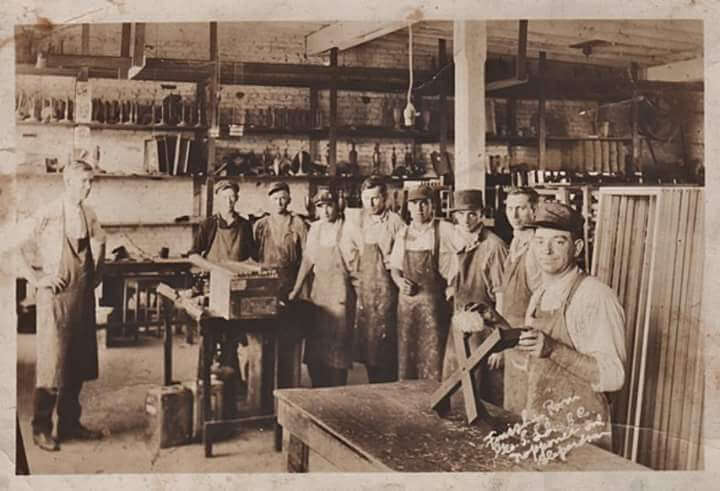 The photo is of the interior finishing room of the George l. Lamb factory in Nappanee, Indiana.  Dan has a strong interest in this photo. His Grandfather, Francis Miller, is the man on the right. Dan said he still has an aunt that he was able to ask questions concerning the facts about the picture. They, Dan & his Aunt, think this picture was taken in the mid-1920s and published in a newspaper. They also think this factory was on South Madison street. In the actual picture, you can see examples of table lamps on shelves on the wall.

I can add a little to the story. The Nappanee Weekly News published a couple articles on the new company coming to Nappanee.

FACTORY COMES TO NAPPANEE        — The George L. Lamb Brush Factory Comes from Goshen to Nappanee this week. The brush, easel, and novelty factory of George L. Lamb, of Goshen, is being moved to Nappanee this week. This is a good beginning for 1900. The enterprise has been secured to Nappanee through the prompt movement of enterprising citizens during the past week, and it surely marks the beginning of another prominent manufacturing concern for Nappanee. Mr. Lamb had been negotiating with citizens of Warsaw for removal to that city, but Nappanee’s offer was preferable to Mr. Lamb, and the business came here as stated above. The machinery for the manufacture of brushes, easels, fire screens, etc., has been moved into the old furniture factory building which he bought and which will be fitted with proper repairs. The two lots on which the building stands and which are owned by the Furniture Company are rented with an option by Mr. Lamb for their purchase during five years at $600. The town also pays the expense of moving here from Goshen and provides for working capital. ——-Goshen is sorry to lose Mr. Lamb and his industry but he goes back among old neighbors, having been a former Locke Township resident. —-

The George Lamb company was persuaded to move to Nappanee by the town fathers which included the Coppes Brothers, Samuel, John, and Frank. We do not know how large a financial incentive was part of the deal, but certainly more than just friendly encouragement. An empty factory building was found for the new business to move into. Often the last pages in several Coppes, Zook & Mutschler Co. catalogs were advertisements for the George L. Lamb business. Definitely, the Coppes, Zook & Mutschler company helped Mr. lamb come to Nappanee.

– During the past two or three weeks the News has had opportunity to observe the comparative growth of the newest of Nappanee’s institutions, that of the manufacturing industry of Geo. L. Lamb. Murry’s printer has just completed two thousand catalogues for the factory mentioned. It is practically, the first catalogue ever issued by Mr. Lamb since engaging in the business, ——– From a half dozen employes his force has grown steadily but surely, until there are now twenty-two people on the pay-roll. ——-

NEW INDUSTRY IN NAPPANEE.  WILL BE IN OPERATION ABOUT JULY 1ST. ART GLASS SPECIALTIES. WILL OCCUPY NEW THREE-STORY BRICK BUILDING – A BEAUTIFUL LINE OF SHADES AND NOVELTIES.  Lamb Bros. & Green is the name of the new manufacturing firm which has been organized in Nappanee for the purpose of making art glass and all kinds of art glass specialties, and to take over that part of the art glass business already owned by Geo. L. Lamb. Geo. L. lamb, David Lamb & H. B. Green are the members of the new company. ——- 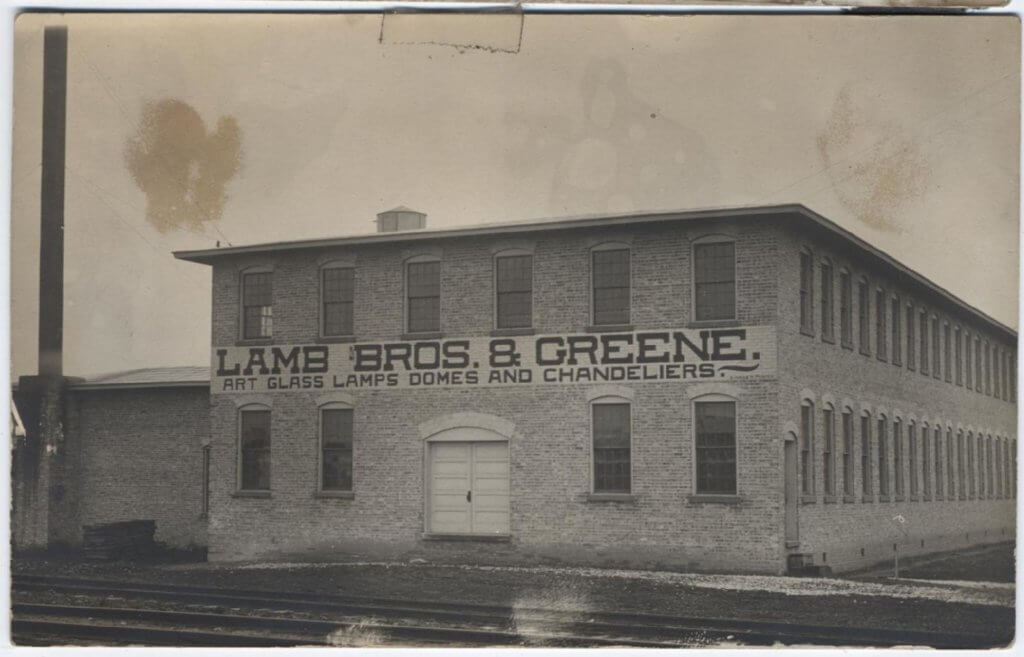 George and David were brothers and H. B. Greene was George’s son-in-law. The “new three-story brick building” was the buildings on South Jackson St. by the R.R. tracks, now the large feed/grain mill. We have one aerial picture of the buildings with both names on the building. 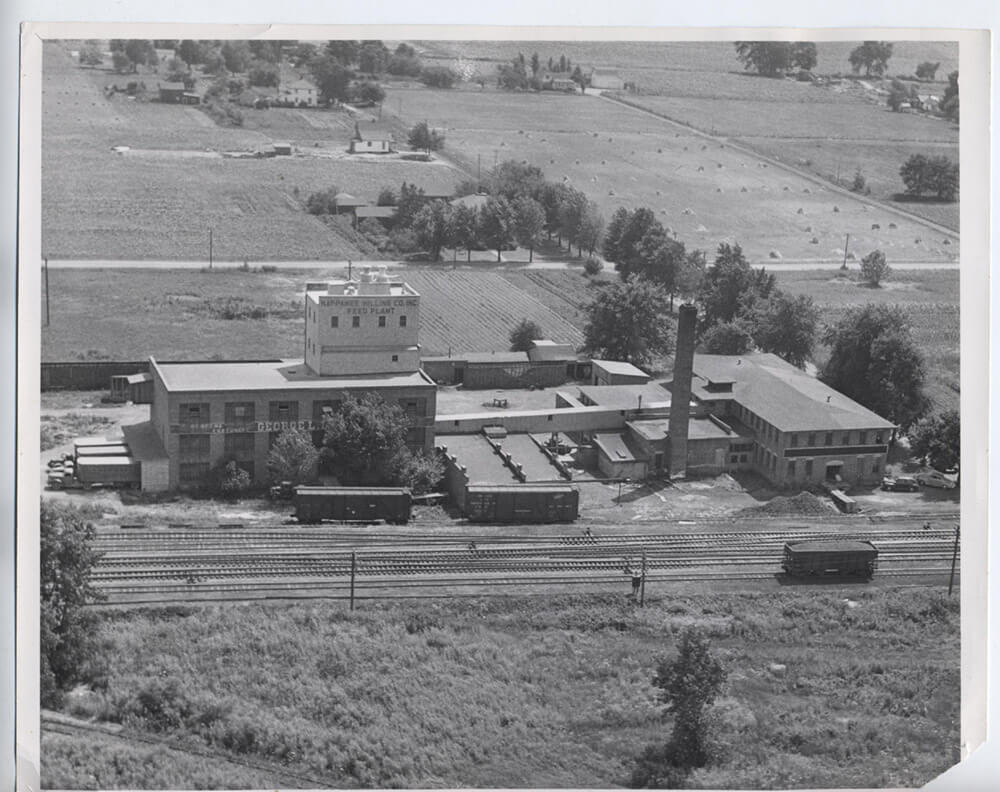 Any of the products from the Geo. L. Lamb company are highly collectible today. Coppes Commons has a few Lamb table lamps in the large showcase in the museum.

The Nappanee heritage Center supplied this 1923 photo of the Lamb Bros. and Greene Company, with a list of names. The list of names appears to start with the upper left person. The comments are interesting. 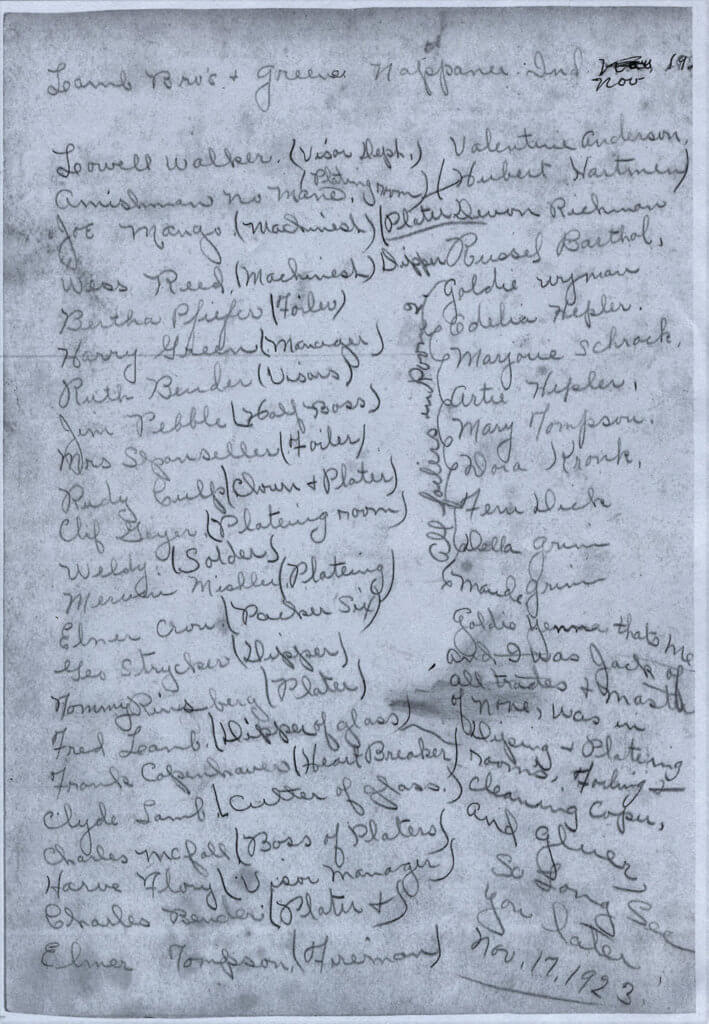 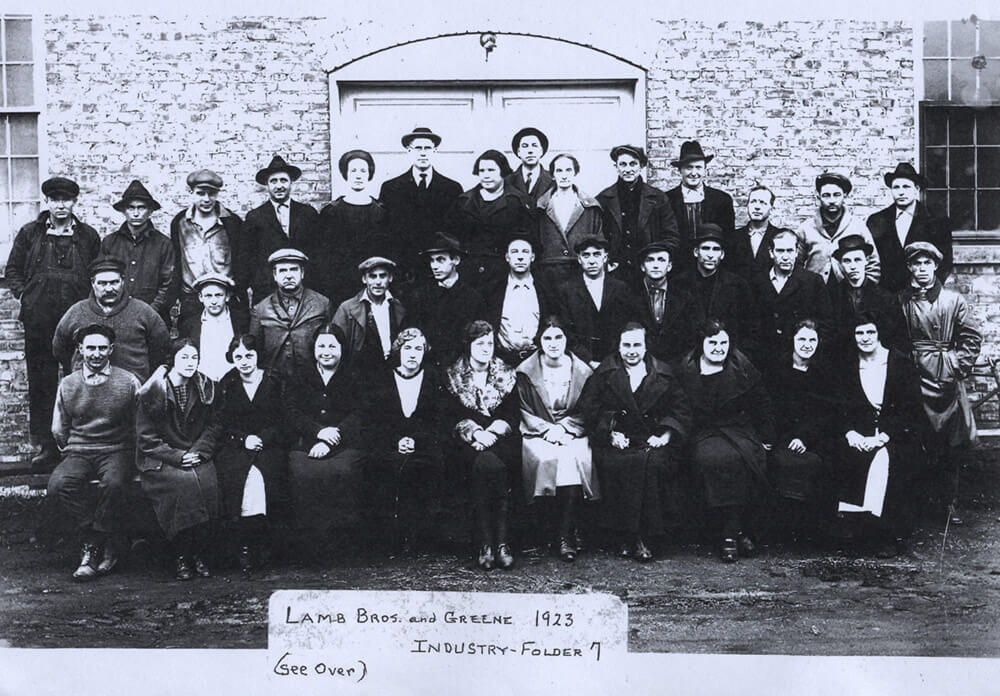