This week we are looking at a picture titled Coppes “Employees, Nappanee.” There isn’t a date printed on or associated with this photo. But just look at those smiling faces, someone must have just said a joke or else they are so cold they want to get the picture over with as soon as possible.

I think these 36 men represent the Coppes Bros. & Zook sawmill crew and the company’s teamsters. Around 1899, there were as many as 13-15 teamsters bringing wagon loads of logs to the mill in Nappanee. The Coppes Teamsters worked almost like what we would call “independent contractors” today. Each man oversaw the maintenance of the wagon or sled they used and the care of the horses in their charge. And by care, I mean feeding and watering morning and night and brushing and bedding down each horse each night. They also took care of things like having horseshoes replaced when they are lost or worn down. The company stable was the brick building to the east of Coppes Commons next to the parking lots. This is where the horses were housed, cared for and looked after.

During times when there was an abundance of logs, the sawmill was operated 24 hours a day. Other times it cut back the schedule as needed. When the sawmill was working will, I would think a single log may take approx. 10-15 minutes to be cut into boards.

Realistically there needed to be three crews working in and around the sawmill. One crew would be operating the mill itself, controlling the machinery and setting the carriage for each new cut. Another crew would be charged with bringing logs to the staging area where they can easily be rolled onto the carriage. This crew would need to keep up with the saw operators. In a 10-hour work shift, this crew may need to drag/haul/ push/pull as many as 40-50 or more logs from the storage yards, all the while being careful not to have a log roll over them. The third crew is the men that remove the cut boards and stack them in the yards for air drying. No forklifts for this crew, every green and heavy board was moved by hand.

Notice how some of the men are dressed. Some with gloves, some with wide-brimmed hats (keeps the sawdust off their heads) and heavy shoes. Almost all have their shirts buttoned up to their necks if not their coat also. Was it the cold or were they just trying to keep the sawdust out? Whatever, it was hard tiring work, but this was also the business that the Coppes family of companies was built upon. For that we sayTHANK YOU and extend our gratitude to all former employees of the Coppes family of companies.

We used this employee photo when we were highlighting the history of the “NAP” bicycle, which was made in Nappanee. 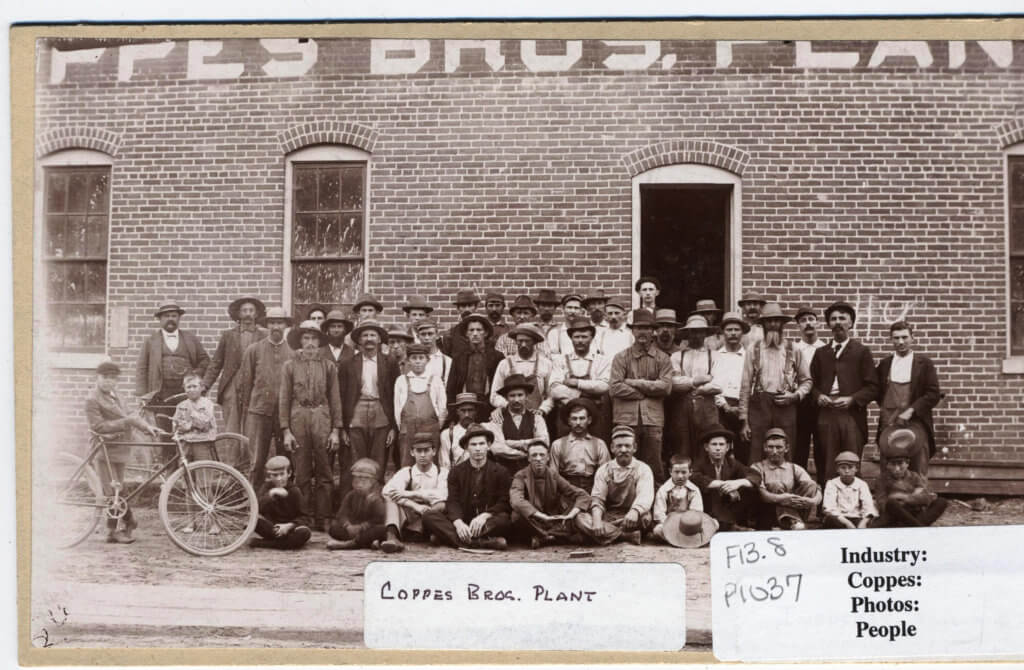 However, I had forgotten about this picture below! 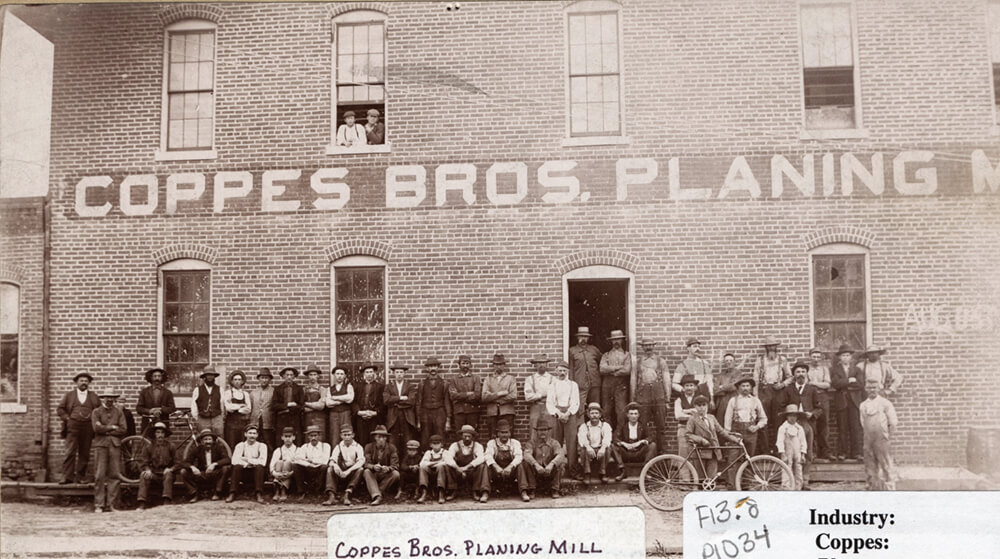 As we were explaining the NAP bicycle story I got to thinking, “What else do we know about this picture?” The answer to that question is, “not much.” Besides, this will give me a chance to ramble on about something. Thanks for looking and reading. Thanks, also to the Nappanee Center for this copy of the original picture from their collection.

We know the location: in front of the Coppes Bros. Planning mill & Box factory. This building was erected in 1884 by the Coppes Brothers Company (Sam, John & Frank) to increase the output of the Box factory that they had been operating on South Main St. at the location of the flour mill. Before John & Frank joined John Mellinger at the sawmill, (1876) John Coppes at 16-17 years of age had the steady job of hauling wagon loads of wooden boxes to Elkhart from the former Strohm Box Co. The Strohm Box Co., later purchased by a Mr. Spencer, is the company that the Mellinger & Coppes Bros. Co. would purchase in 1879, (4/10/1879, Nappanee news) and move (1884) to the East Market St. location.  John Coppes would marry Mr. Strohm’s daughter, Melinda, in 1878.

That’s about all we know for sure about this picture. That got me to studying the photo with a magnifying glass and wondering what we could make educated guesses about.  The people in the picture are obviously workers at the Coppes Bros Company. The box factory, the sawmill and the retail lumber business were operated close to this location, so these men may be workers from all the different Coppes Bros. shops. This is a very typical photo of the era where the employees gather in front of their workplace for a group picture.

As far as the date the picture was taken, here is what I think: If you have other suggestions I would be happy to hear from you. Because we were discussing the “NAP” bicycle in a different history segement, the two bicycles in the photo are fresh in my mind and are a strong, and maybe the only hint, as to the date. In my opinion, there were few young boys in Nappanee with families that could afford to have a “NAP” bike. I’m guessing that the two boys are the sons of John Coppes, Marvin & Ivan. Marvin was born on Aug. 22, 1881, and Ivan was born on Nov. 21, 1883. I was a young boy once, and I have asked several people their thoughts as to the age of the boy in front holding the Bicycle.  Our consensus is about 10-11 years old. As I said, Marvin was born in 1881 (if in fact this is Marvin), that would make the picture dated about 1891-92. As I stated, that is an educated guess.

Let us look at the other people in the picture. The first question is what are the children doing there? I’m thinking one of the younger boys that are standing could be an actual employee of the company. Look at the young man (third from left, in first standing row) proudly standing with the “MEN”. Jobs that were mundane, such as sweeping up, picking up trash, helping carry smaller items were jobs for young boys, also with smaller salaries. The reason for the other youngsters in the picture is any ones’ guess. Were they sons of the workmen, that brought their father’s lunch to them and stayed for the picture? Were they neighborhood children that hung around the factory because that was more interesting than anything else they could do. If the Coppes children could be in the picture, why not sons of the workmen?

On a similar note, we have, in the Coppes paper Collection, employment applications from the 1920s-30. In these applications are boys as young as 12-13 years old looking for permeant employment. Several were hardship cases where the child was the oldest male in the family and needed to become a breadwinner for his family.

Check out the two men standing on the right side of this photo – better dressed than most of the other men. Could these two men be John & Frank Coppes?  If the man on the right is Frank, he would be 32 years old, and John Coppes would be 34 years at the time of this picture. I don’t know if it is John and Frank standing there, but I would sure like it to be them. But that brings up another question: Where is Daniel Zook?  In 1890 Sam Coppes left the company and Dan Zook joined with John & Frank to make the company name Coppes Bros. & Zook Company.

Check out the well-dressed man at the left end, could this be the “Mr. Spencer, has been retained as superintendent of the factory” after the purchase by the Coppes Bros.

Also notice that everyone with the exception of Ivan has a hat on their head or in their hands, and only two pairs of glasses in the whole bunch.

What was the graffiti on the brick? Looks like the letters  “HU”, someone has tried to rub it away.

Does anyone notice the difference in the brick building from then to as it is today?

Click HERE to see a list of Coppes Bros. & Zook Co. employees from an 1892-3 Coppes Bros. & Zook ledger.  At this time (1891-94) the company was operating the flour mill, the sawmill, the retail lumber store, wholesale lumber sales, the shipping box mfg. co. and custom lumber milling (windows & doors, etc.). This ledger has lists of employees for the pay period every week. The number of employees differs from one pay period to the next. Only in a few examples does the ledger tell us the job that the employee had. For example, one Jno. H. Felty’s name was usually followed by “nailing boxes”.  In most cases, the names are listed under “LABOR”. Other reoccurring jobs were hauling boxes to Elkhart and sawing trees.

As always, if you have more information on the men pictured or listed here, we would appreciate hearing your stories! Please leave us a comment, or email me at bill@coppescommons.com.