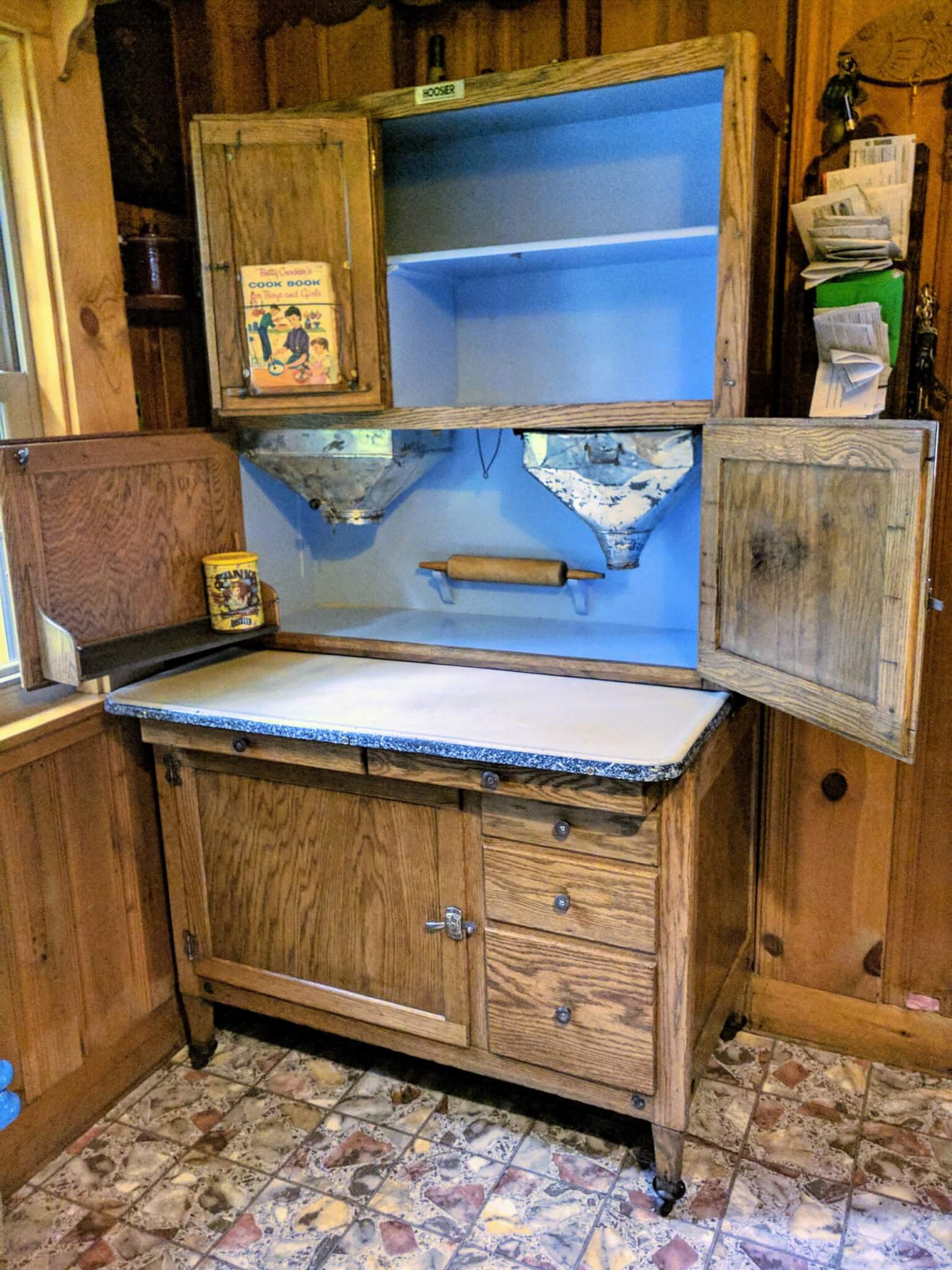 This Hoosier cabinet was given to me by a good friend when cleaning our her mother’s house probably over 20 years ago. Just finished restoration! I’m now lovingly finding baking and cooking items to fill the drawers and cabinets. I think it’s missing a rack on the top hutch, lower right door as there are horizontal dark thin stains (3) and 4 screw holes. I can’t find a picture of my exact cabinet. Would like to know the year. I know there are many styles and don’t see any identifying marks anywhere. Curious if there was a Hoosier museum and found you! Would love to visit soon. 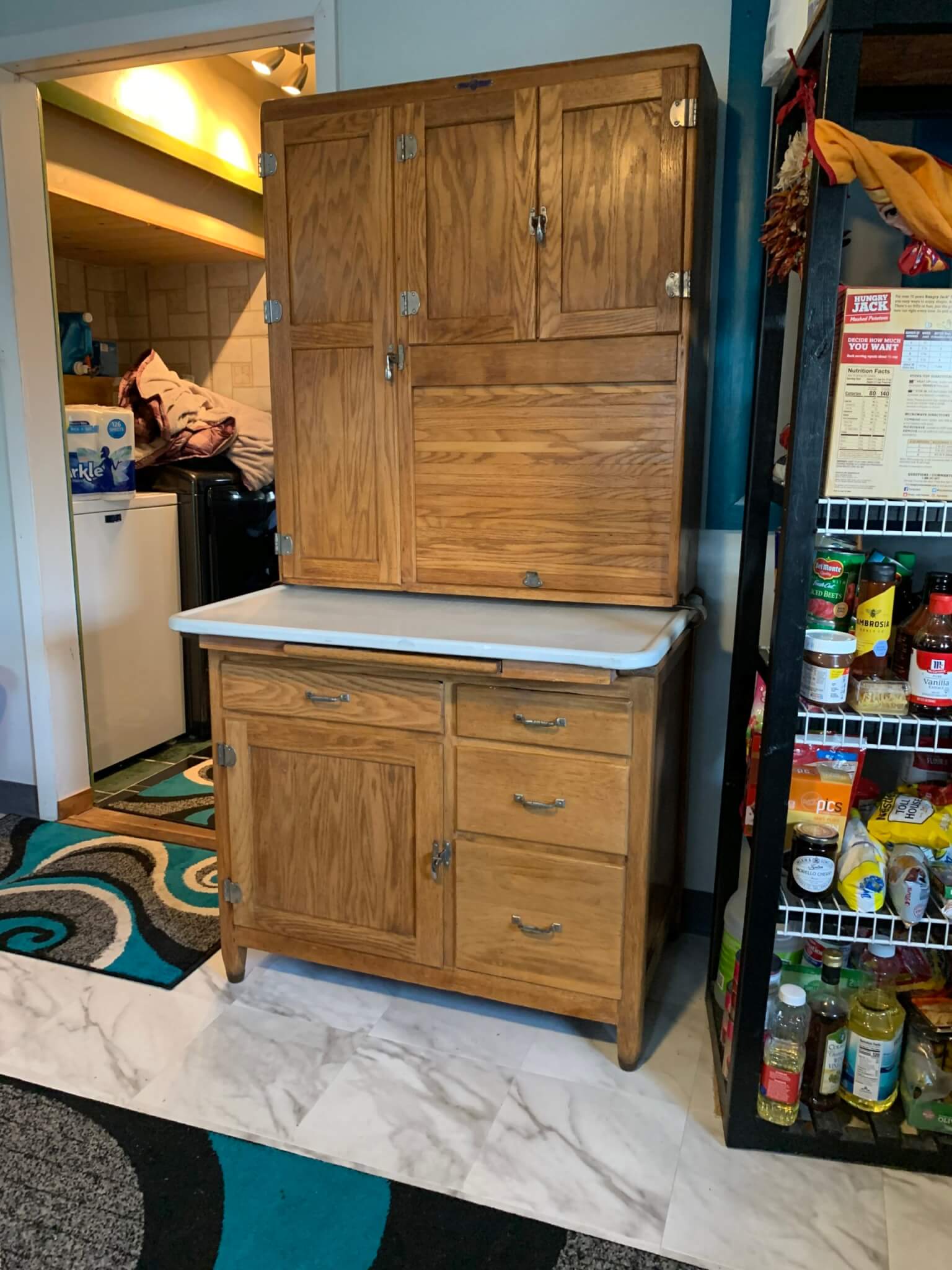 Our cabinet started out in Elmira,NY. A neighbor of my grand parents gave them the cabinet when they moved, It was painted green. My grandfather used it as a woodworking bench/storage cabinet in his basement till 1972. At that time my mother had it put in our basement for me to use for woodworking.(I was 15) In the 80’s my mom had it restored to a natural finish, the one on it today. My sister took it to her home in Balston Spa, NY where she used it for storage in her kitchen until this year(2020) when I brought it to my house in Westerlo, NY. We are using it as a kitchen cabinet.

Welcome to this week’s Bill’s History Corner. This week we are looking at a photograph of Nappanee’s young people – possibly a group of young people at the M.E. Church in Nappanee. There are several prominent Nappanee names in this list. In fact, maybe some of your ancestors are here. In 1899, I would guess that almost everyone living in Nappanee had a connection with the Coppes Bros. & Zook Co. or the Nappanee Furniture Co. Except for retail stores and farming, the major employers in Nappanee were these two previously-named companies.

In the front row are Lillian and Della Coppes, daughters of Samuel Coppes. Harold Zook is the 4th person in the 2nd row. Harold was Daniel ‘s son and one of the six partners, starting in 190,2 in the firm Coppes, Zook & Mutschler Co. (In 1899 Harold is close to finishing law school at Ann Arbor).  After the partnership with the Mutschler Bros. broke up, Harold became the Zook in the company named” Coppes Bros. & Zook” from 1912 thru 1936. In 1936, the remaining Coppes family members purchased Harold Zook’s shares in the company and then incorporated the company.

In the back row we have Bessie Coppes, daughter of Frank Coppes, next is Charles Mutschler (another partner in Coppes, Zook & Mutschler Co.) In 1899, Charles was a 2nd-year student at IU in Bloomington. He married Della Coppes (front row) on June 19, 1901. A very busy person.

Again, I wish to acknowledge and thank the Nappanee Center for the use of this photograph.

Welcome to Bill’s History Corner, where sometimes I show you I don’t know what I’m talking about. This may be one of those times. I’m showing a picture today that we have in the Coppes paper collection, but I have no idea where it came from. Maybe if I would ask everyone involved with Coppes Commons, someone might remember obtaining this picture and giving it to the collection. It does have a price of $18.00 written on the back. So if you are the person responsible for this picture, a sincere Thank You.

The picture itself is of two buildings on a dirt street with several men, ladies and children standing very still. The sign on the one building is HELMLINGER & BAUER.

This is one of those times when I wish someone had written a complete history on the back of this picture. But wait. . . there is some information written on the back! In pencil, this is on the back.  “TAKEN BEFORE 1875 UNCLE GEO. HELMLINGER + ADAM BAUER STORE, BEFORE NAPPANEE AT LOCKE.”

I think everybody knows the story of Locke and Nappanee, but here is a recap if you don’t remember: Locke was a thriving small town approx. three miles north of where Nappanee is now. When the railroad came through the new town of Nappanee in 1875-6, several Locke businesses moved lock-stock, barrel and building to Nappanee. The railroad was the key ingredient. Because of the location of the railroad, Nappanee grew and Locke didn’t.

Now I’ve got to tell you there is no mention of a Helmlinger & Bauer store in the 1880 History of Elkhart County book. More information would be wonderful. What business was conducted at this store? See the man in the top hat, talking with two other men? See the man in the dirty apron standing to the left of the door? I don’t think he is a store clerk with that apron. But what do I know is that I count at least 10 and maybe 11 children on the porch. When I enlarge the photo as much as I can there is something in the store doorway that looks like a black bear’s face. I really don’t think it is a bear, but definitely a face, maybe a big long haired dog. While I’m thinking about dogs, the two ladies in the doorway of the building to the left have what looks like a black puppy’s head at their shoulder. Can’t read the sign over the door where the ladies are standing. Could be a school, the children look to be too close to the same age to be from one family, so in my mind a school makes sense. I think I can see a new bucket hanging in the store door way, That may be a clue as to the business, also I think there are ice skates hanging in the left window.

Boy, I wish I gould go to this store and shop for myself at 1875 prices! Does anyone know more of the history related to this photo? 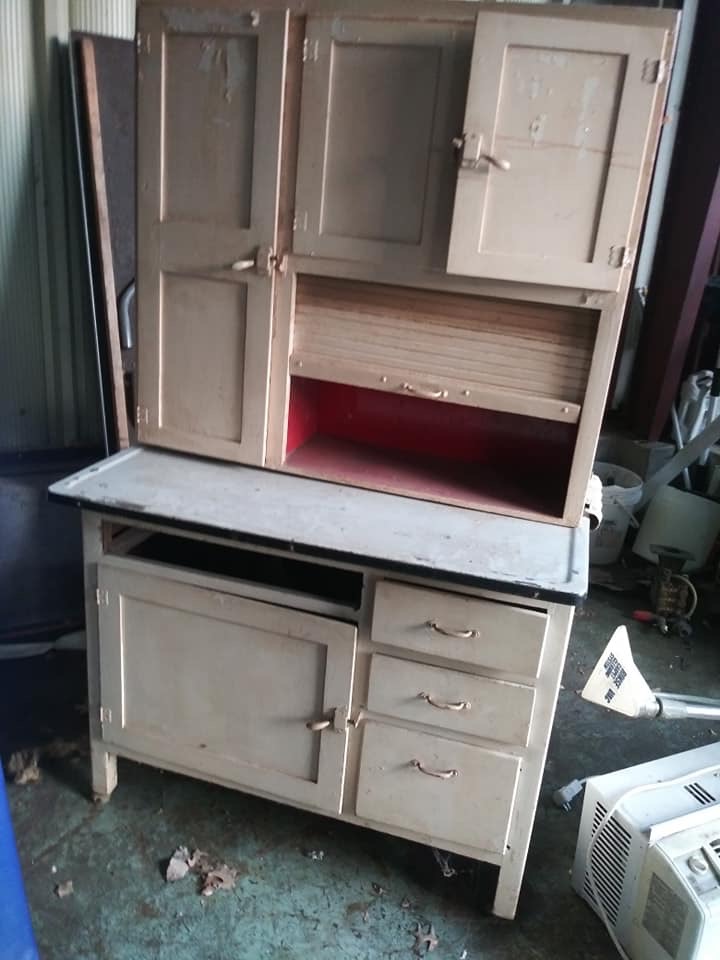 Buying this for $50. So excited!! Don’t know anything about it though

Purchased from a friend whose father in law said it had been in his family as long as he could remember. It had been painted at least four times. The flour bin is gone. I believe it was built in the 1920s. It has the blue Napanee label on it. We stripped the paint. The original paint was gray and there were flowers painted on the doors. We replaced the back of the top and bottom, but kept the part that was stamped that it is Model G. 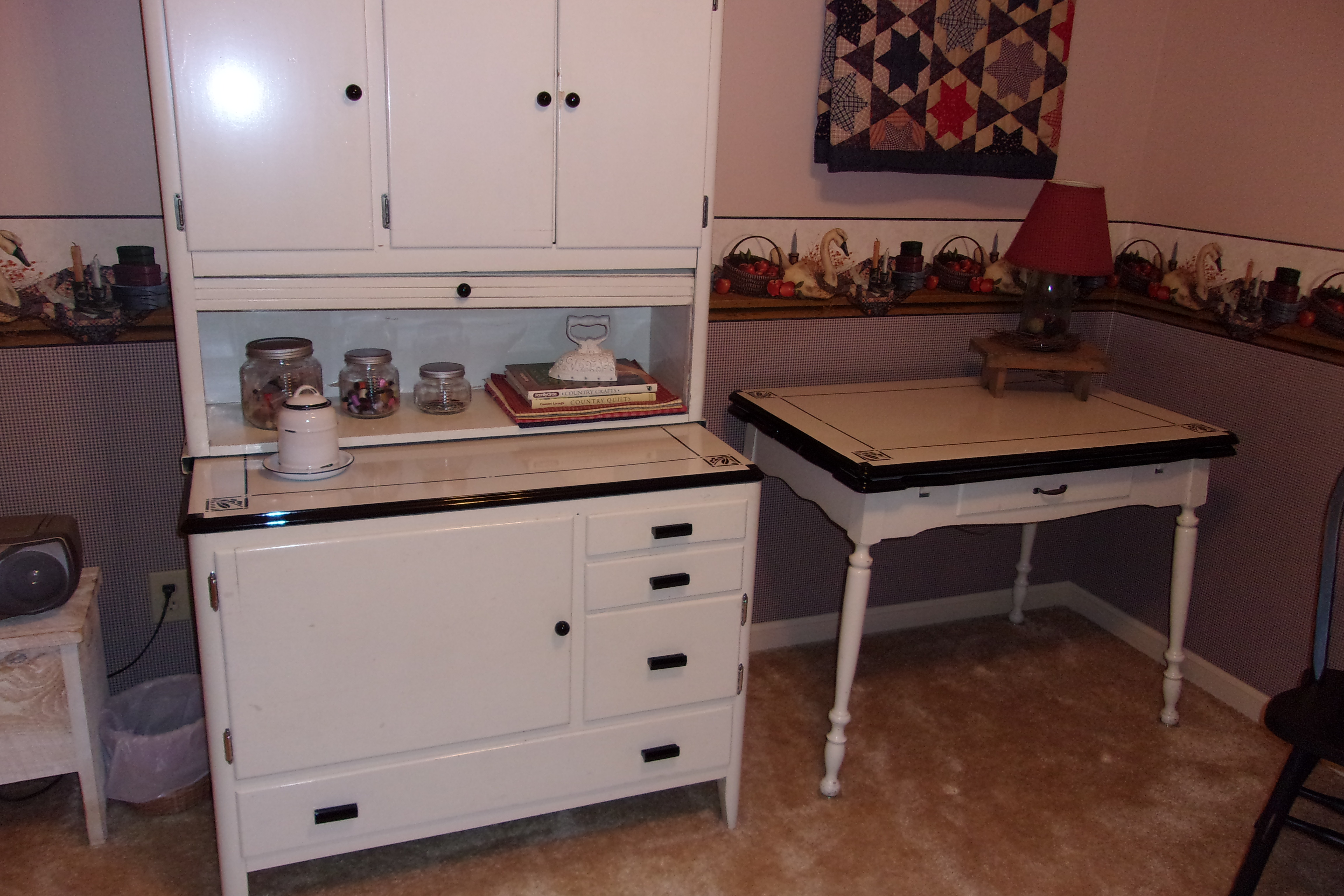 Manufactured by Mutschler Furniture in Nappanee. My mother was a housekeeper for Mr Mutschler and he gave her the Hoosier cabinet as a wedding gift. At the same time my father purchased a matching Hoosier table with a enamel top that matched the cabinet top. The year was 1936. 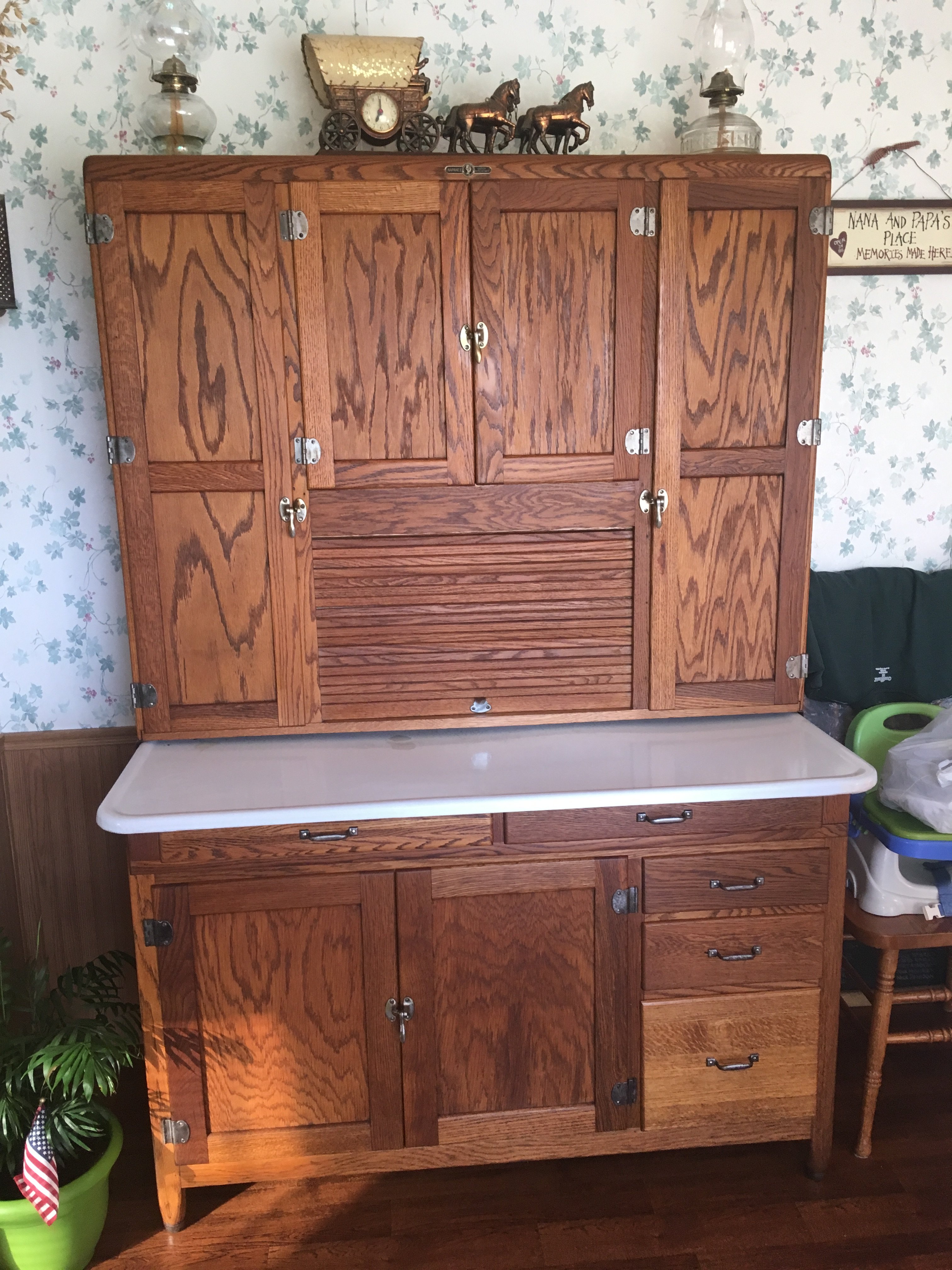 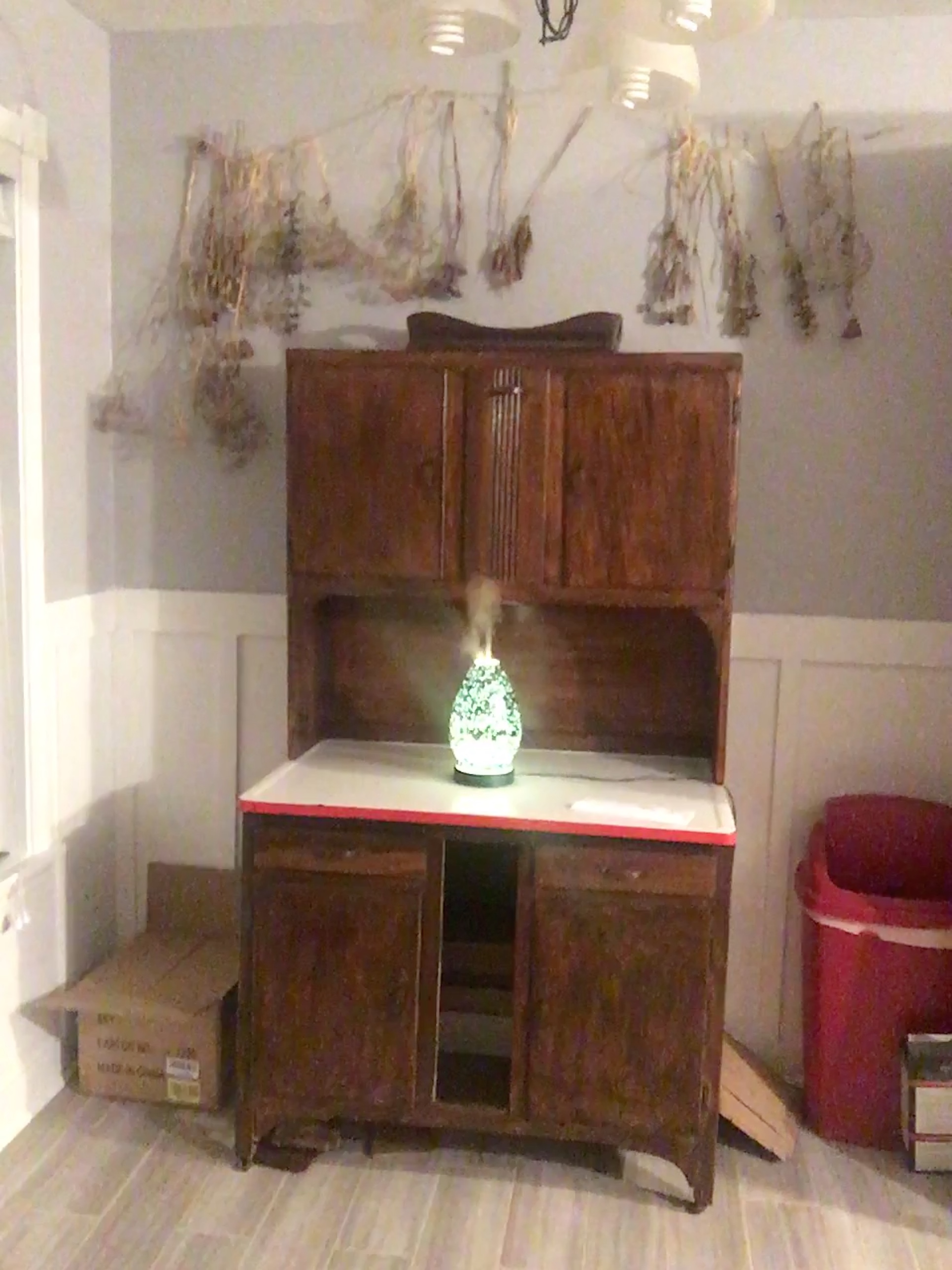 I purchased this recently and would like to restore it, but not sure if it’s a Boone, a Hoosier, a McDougall…??? Help! On the bottom of the enamel countertop, it reads “Enameliron, December 1941”
Any help will be much appreciated!

Hello every one. Welcome to another of Bill’s History Corners. Today we are going to go off script a little, well maybe not that much. We will see how this turns out. As you have realized, we are interested in almost anything related to Nappanee. The businesses, the industries, the retail stores, and the people that made up the great town of Nappanee.

One such industry in Nappanee that we are following was the Nappanee Lumber& Manufacturing Company. Locally called “Uline” because the owner and founder were Barney Uline and family. Mr. Uline was an early member of Nappanee. He had a general store in the town of Locke and moved everything to Nappanee. Later in Nov. of 1884, he traded his dry goods stock to Mr. Geo. Freese, Sr. for Mr. Freese’s BUTTER TUB FACTORY. Apparently, an even trade. Mr. Uline continued the mfg. of butter tubs, while Mr. Freese sold off the stock of dry goods and then devoted his time to the creamery business.

Mr. Uline’s business soon expanded to include a line of children’s furniture. We have several examples in the large showcase in the 2nd floor Kitchen Cabinet Museum. This line of children’s furniture was extensive. It included beds, dressers, tables, high chairs. Also, other products of the Nappanee Lumber & mfg. co. were ironing boards and folding card tables & chairs.

All this is interesting, but what I really wanted to talk about today was another product manufactured by the Nappanee Lumber & Mfg. Co. and that was wooden SILOS for use on the farm. In a written history of this company, the writer described a purchase that the Nappanee Lumber & Mfg. Co. made in early 1930. Apparently, the company was able to purchase many train car loads of a large size of cut timber. So large was this purchase that the company had difficulty finding space to unload all the train cars on their lot. As I remember reading it, the deal was too good to pass up, even if the company had no idea at the time what they could manufacture from the large sizes of wood.  There should be a saying about that kind of business opportunity.

So, the Nappanee Lumber & Mfg. co. began producing wooden SILOS. The train loads of large pieces of lumber was the beginning of another product line for this company. With some careful milling, the company made Silo wooden pieces that could stack and fit together and made an airtight seal which was ideal for use on farms. We have one 24-page brochure from the Silo building company. I have scanned a couple of the more interesting pages for you to see. 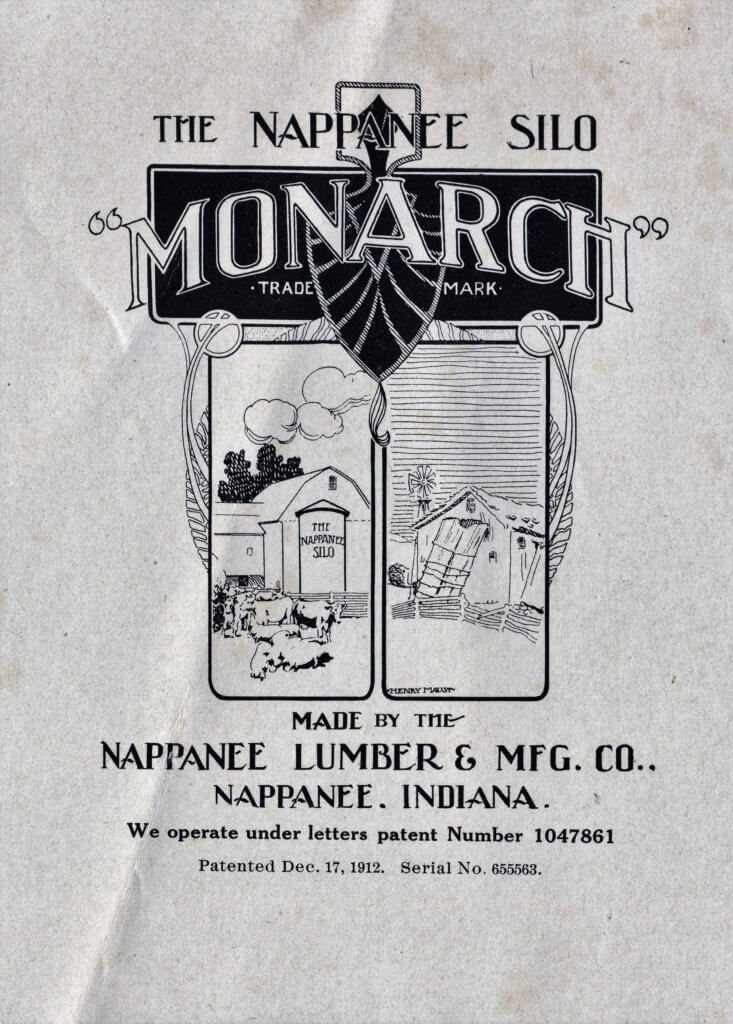 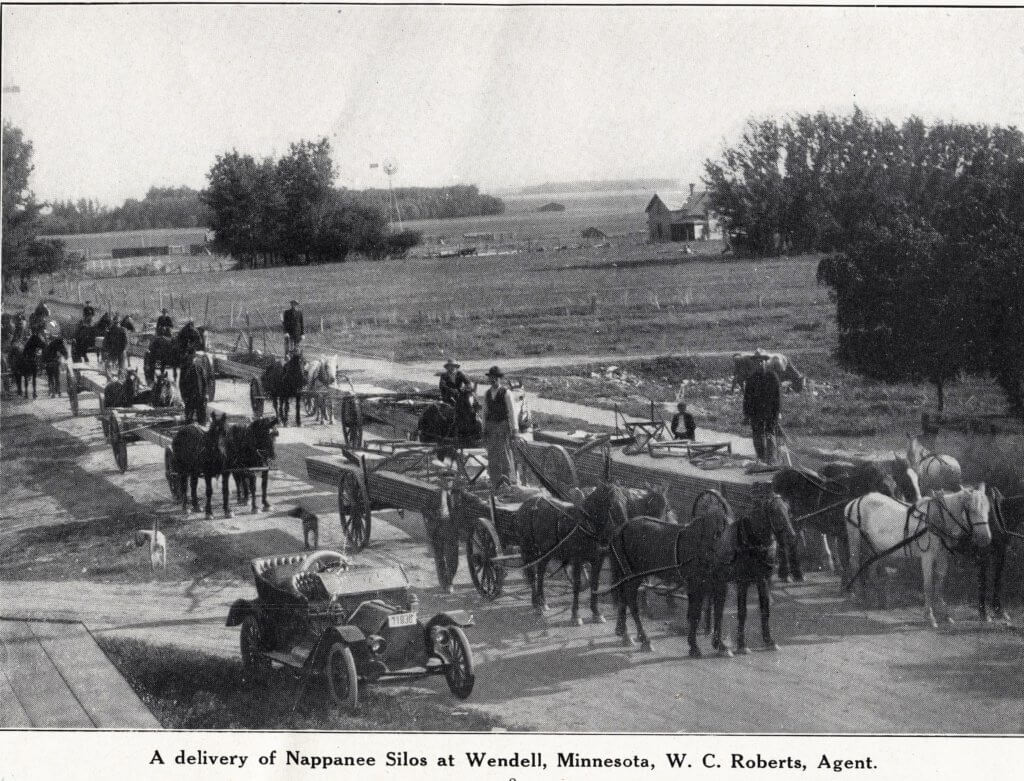 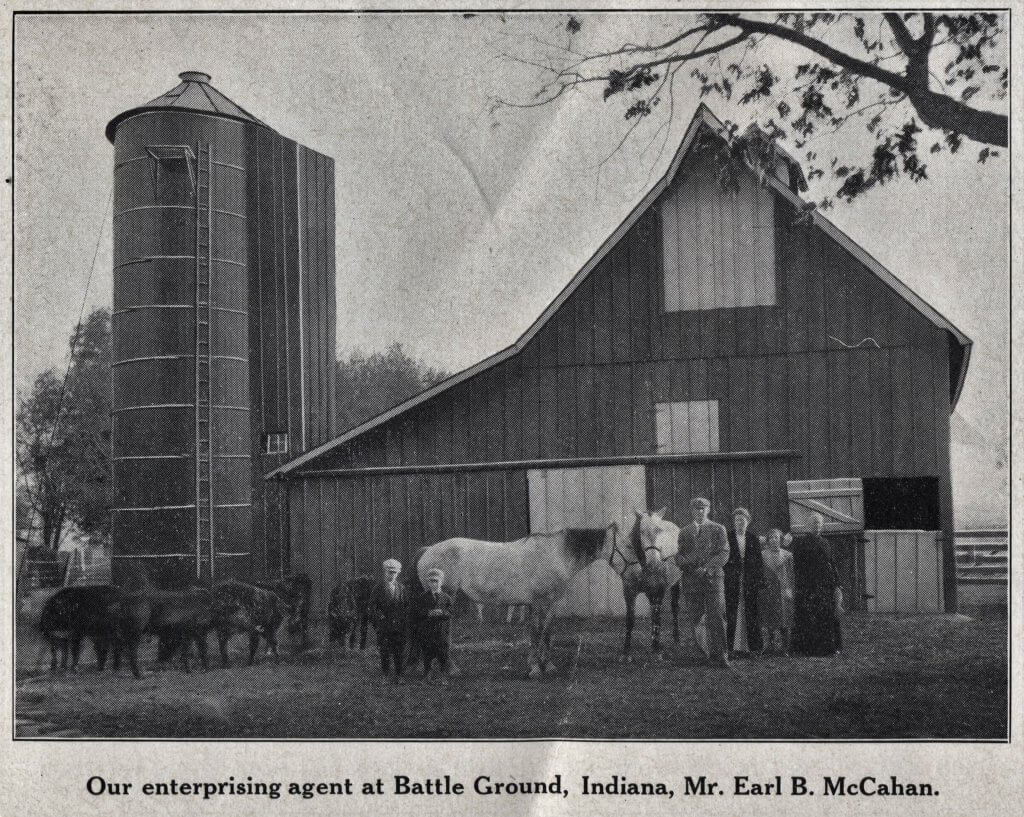 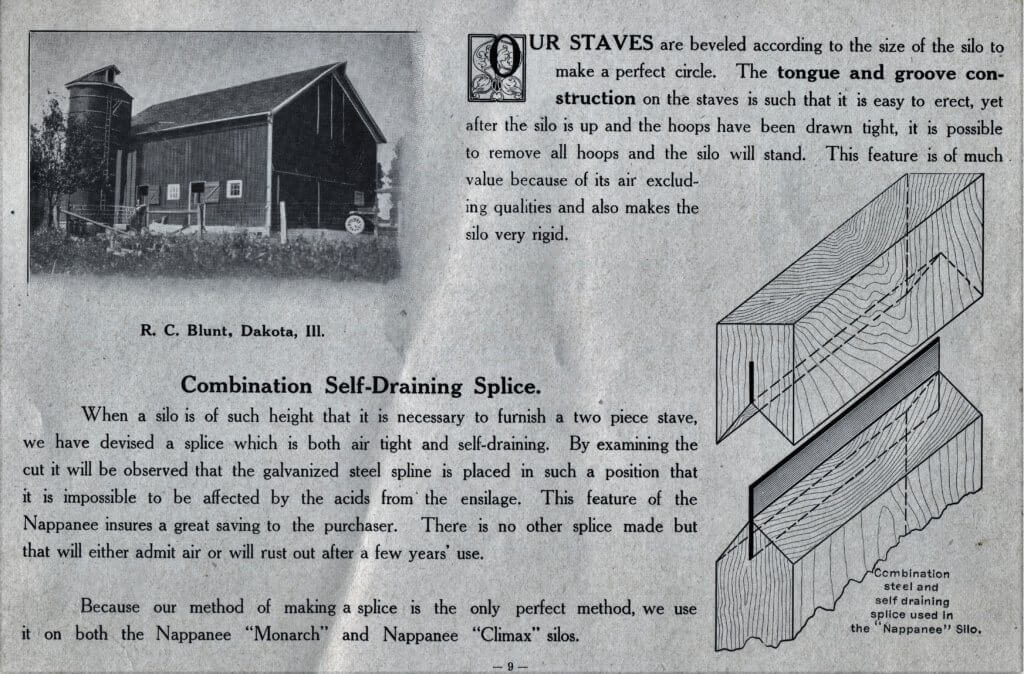 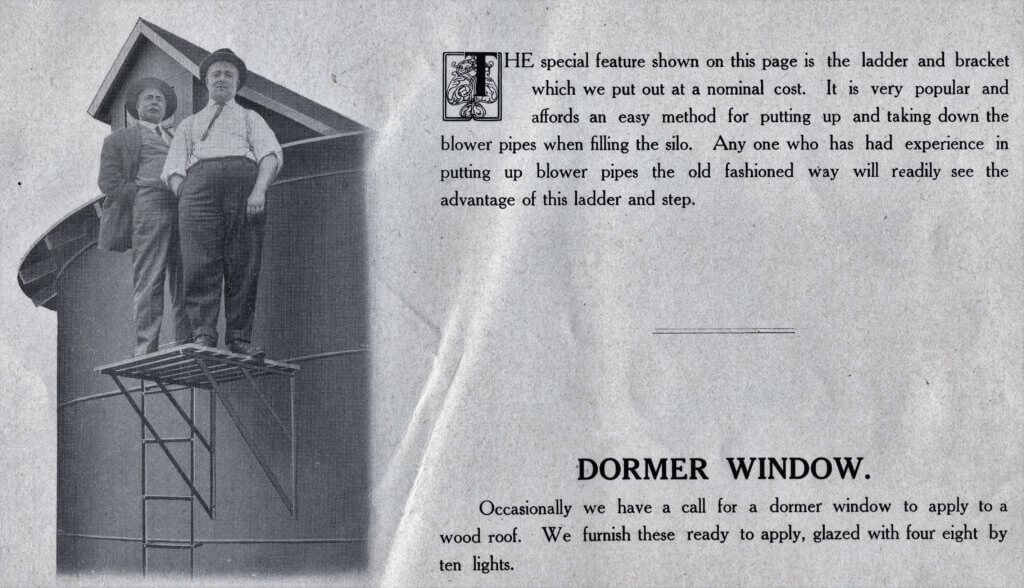 I think it would be interesting to find an existing wooden Silo from the Nappanee Lumber & Mfg. Co. I have no idea what we would do with it but it would be interesting to find. I’ve noticed that there are several youtube videos showing people knocking down farm silos that are no longer safe or serve a useful purpose. Very sad. Enjoy the scans and as you drive around the countryside keep an eye toward any farm silos. Seems like they will soon disappear from the landscape.