Welcome to Bill’s History Corner, where I try to show some of the more interesting photos that we have in the Coppes Commons collections then try to explain as much as I can about the picture. Some of that explanation may be a guess on my part. If you have a different version, I want to hear your story. 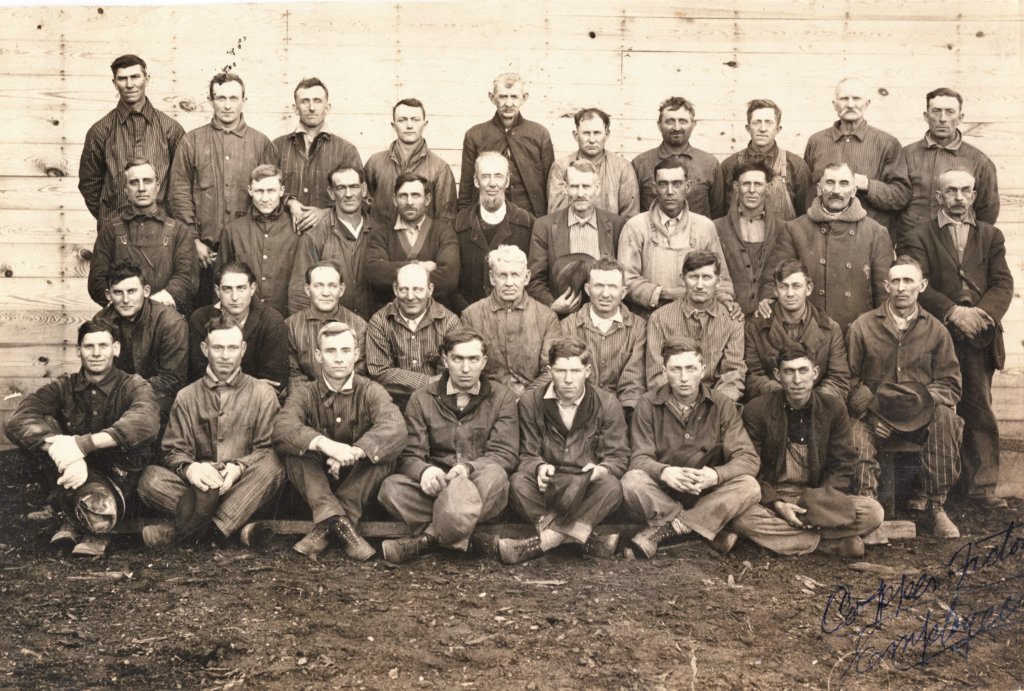 These 36 men in this photo are identified as “COPPES FACTORY EMPLOYEES.” Someone wrote that on the bottom of the photo with a ballpoint pen, and on the back side is a taped-on card with six of the men identified. Those names are “2nd row from back, 5thfrom left: Benjamin Miller, end: Harvey Kraft.  Second row 4th from left: Sam Defreeze, 6th: Rufus Shank, 7th: Mr. Bleile, 9th: Chas Norris.   Can you identify any more of these men?

What can we determine from studying this photo? The first thing I notice is that these men are mostly dressed for outside cold working conditions. Everyone in the front row is holding his hat and several are wearing gloves. Most have their coats buttoned up to their necks and several of the men have a bulky sweater showing around the collar. I can almost guarantee you that every one of these men are wearing “long Johns” under all of that. There is a wide range of ages of men. The youngest may be in his early 20s, while the oldest appears past retirement age. Could men afford to retire during this era?

Only one of the men is plain dressed, indicating Amish or Mennonite. There are several mustaches and a few unshaved faces in the group, but only the one beard. As for an estimate of the time period I’m going with 1890. Here is the reasoning for my guesswork: I think the building that these men are posed beside is the recently-built second sawmill.  At the time, it was located behind the Coppes Factory South of Lincoln St. Notice that the wood siding is still clean and not weathered, no weeds or grass on the new site. Work on constructing this sawmill was started in 1888. Most other Coppes Bros. & Zook buildings were brick. I think these men are the crews that worked in and around the sawmill. The other large group of Coppes workmen at that time were the men in the Box factory.  This was all inside work, so I think they would be dressed differently. I think this group of men worked in the sawmill where sawdust was flying. They probably also moved logs to the mill and stacked the lumber after it was cut so it could air dry – hard work for everyone. Another possibility is a couple teamsters in the group, but I don’t see anyone dressed differently. What do you think?