The flour bin was an important part of the Napanee Dutch Cabinet and many other brands as well. It is my feeling that Coppes purchased the tin ware they used from wholesalers, as did other cabinet makers, which is one reason many brands of kitchen cabinets are so much alike.

Harold Frank Coppes was granted a patent for a flour bin on November 28, 1916. Apparently, the company could not find a flour bin on the market that was correct for the latest cabinets designed by Coppes. Harold would have been 31 years old in 1916 and climbing the company management ladder. The main improvement stated by this patent was the ease with which the flour bin could be filled, as the flour bin pivoted out of the cabinet to expose the filling opening which could be closed by a locking cap. 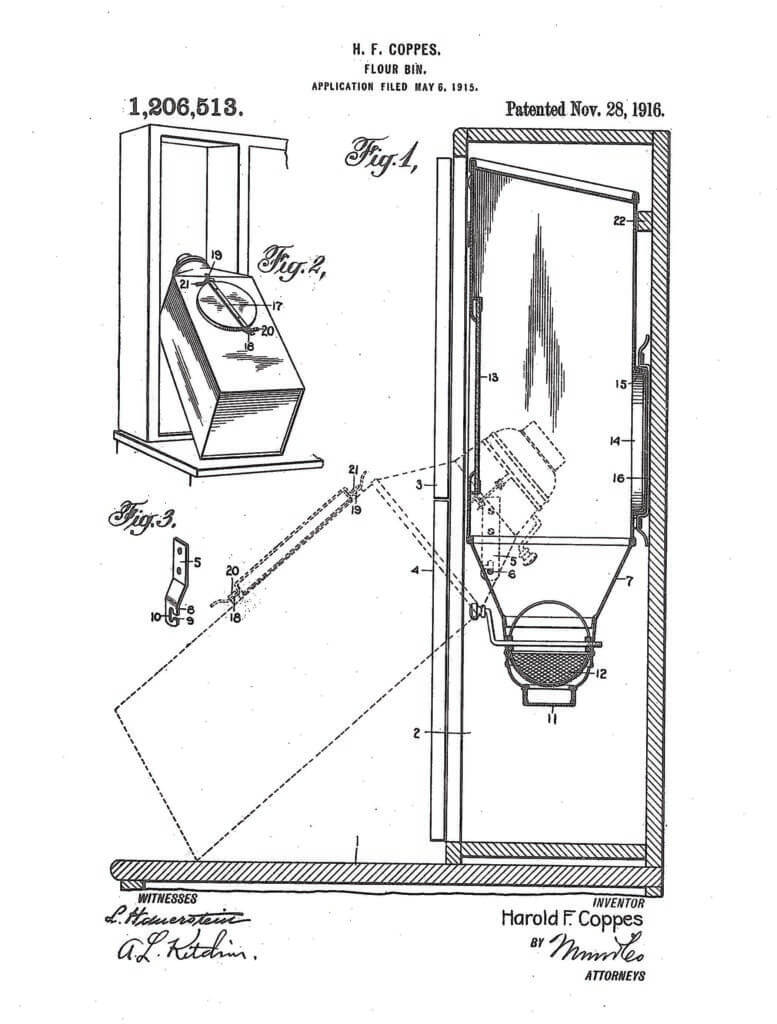 The year 1916 was only 4 years after the partnership between the Mutschler Brothers; father and Son, Dan Zook and Harold Zook; and brothers John and Frank Coppes dissolved with the death Dan Zook. The Mutschler Brothers (Albert and Charles) went back to the old Nappanee Furniture Company buildings and continued producing furniture and kitchen cabinets. While the Coppes Brothers, John & Frank, along with Harold Zook began concentrating on the production of the popular kitchen cabinets that we now call the Dutch Kitchenet.

From the few Coppes business ledgers we have in the collection, I feel the 1920s were the peak years of Dutch Kitchenet production. Our records show that in 1924 the Coppes & Zook company produced and sold over 24,000 cabinets. Do the math. If the company worked 6 days a week, how many cabinets were made each day, every day, all year long? John and Frank Coppes along with Harold Zook ran the company that did that, along with operating the flour mill on South Main St. and the sawmill with the retail and wholesale lumber business. I stand I awe of what these men did for the town of Nappanee