Today we are looking at a map of Nappanee, date unknown. Hopefully, your computer will allow you to enlarge it to see some of the details. Sorry about the light glare. This map is from my personal collection, one that we were lucky enough to find on eBay. As you may have determined by now my family has a long history with the town of Nappanee. Maybe you can find an ancestor’s name on this map. Good luck hunting! 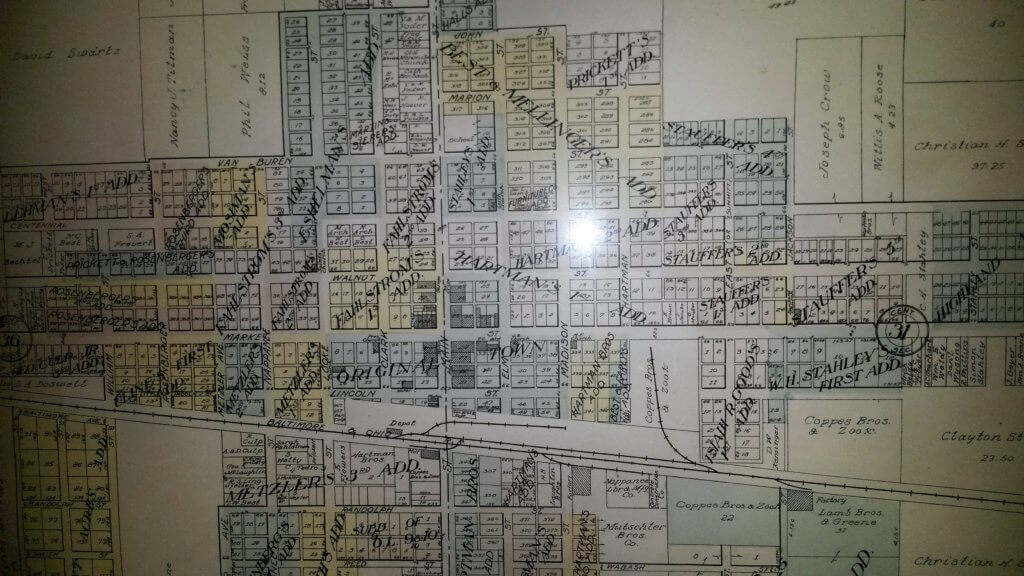 As far as the Coppes, Zook & Mutschler companies were concerned, or later when the company was just Coppes Bros. & Zook (Frank & John Coppes and Harold Zook) they had a large property footprint in Nappanee. You know by now that the name of the company changed as the personnel changed in the company.

There isn’t a printed date on this map so it will take some educated guesses to determine the published date. To begin the process of guessing the date it will be important to know the dates of the Coppes company name changes. The last of the major name changes was in 1936 when the Coppes Family members purchased the remaining company stock from Harold Zook and his mother. The name of the company became “Coppes, Inc.” after 1936, and continued into the next century. So here are the clues that I found that help date this map.  There is the property that is named “Mutschler Bros Co.” that could only be formed after the breakup of the Coppes, Zook & Mutschler Co. in 1913 after Daniel Zook died. The Coppes owned property has the name of “Coppes Bros. & Zook Co.” on it, so the time for this map was between 1913 and 1936.

To narrow the published date more closely than that you will need to look for other sources of information. The Nappanee News should be a major help determining a more accurate date. You will need to look for property transfers and development properties. There are several areas on this map that are marked as “additions” such as “Hartman’s Add” or “Metzler’s 3rd ADD”. You will notice Barney Uline’s property in the South West portion, later you will know this area as the “Apple Orchard”.  Also, the Factory of Lamb Bros. and Green Co. along the R. R. tracks to the East, these buildings that are on South Jackson St. are still there. The Coppes Bros & Zook Company has their name on four large properties on this map. The area of the original factory, (now Coppes Commons) the Mill Property on South Main St., The area on South Jackson St. where the 3rd sawmill was located, and a lumber storage area on the South side of the tracks. Likely there were numerous other properties connected with the Coppes Companies over the history of Nappanee. Remember that John & Frank and also the Mutschler Bros. built houses with the intent of creating housing for company workers to live in when they came to Nappanee to work for their respective company. For a number of years, there was a housing shortage for factory workers in Nappanee.

If you find other clues as to the date of this map, we would love to hear from you. You can contact me with questions or comments at Bill@coppescommons.com  thanks.