During the 1920’s and early 1930,s, Coppes Bros. & Zook had a factory/sales program of furnishing apartments in large apartment buildings with a Coppes kitchen. They did this in several of the large cities in the mid-west and east to New York City (Chicago, Cincinnati, Philadelphia, Detroit, New York City, and smaller cities in between). 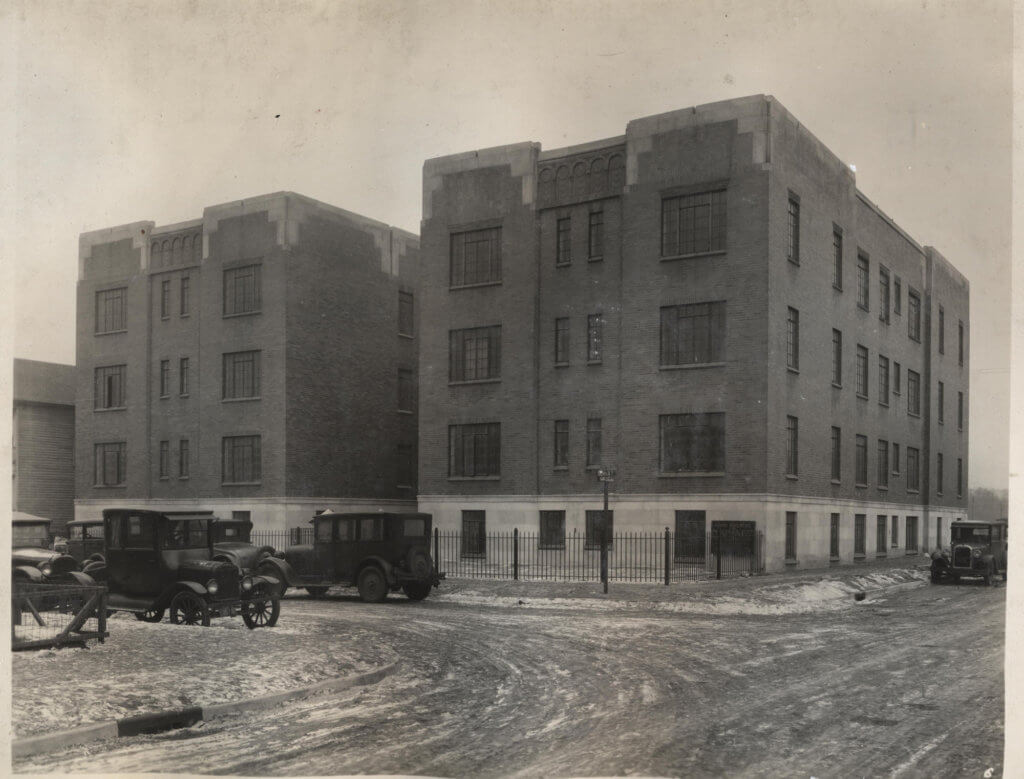 The first is a picture of the McCormick Apartment Building in Detroit, Mich. From the look of the old cars I would date this picture about 1920-25. Looks like a newly constructed apartment building. 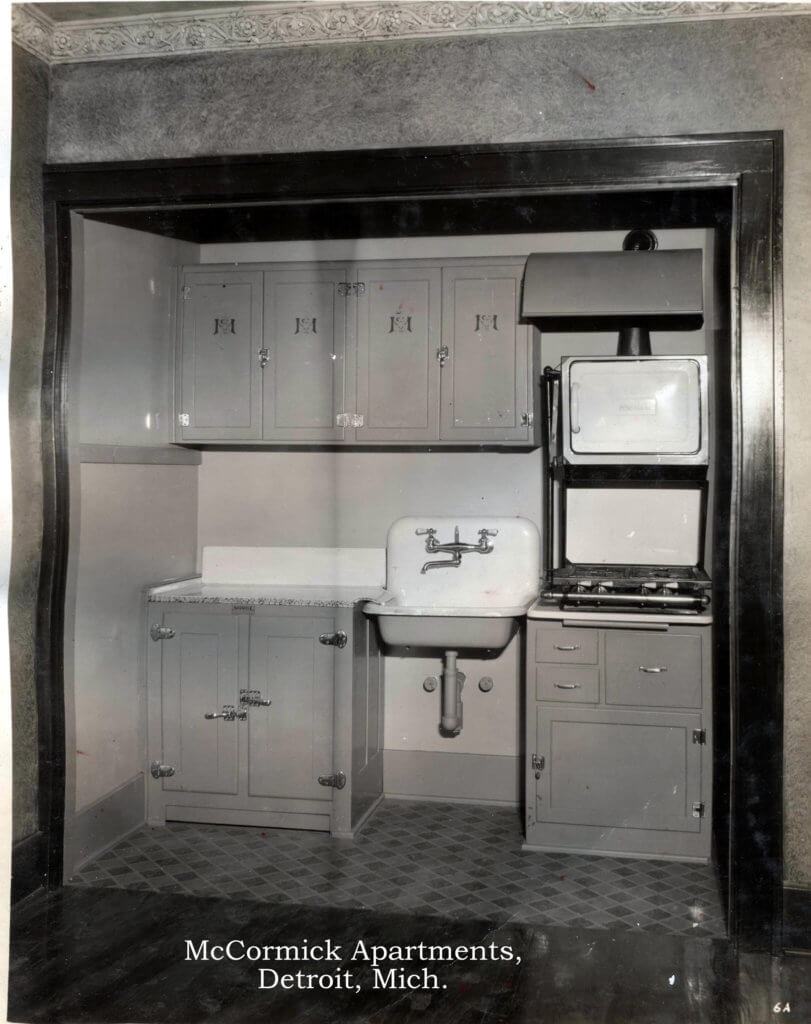 The next photo is of the Coppes Kitchen that was installed in each apartment. Not much of a kitchen by todays standards, a wall mounted sink in the center of the wall, an ice box to the left side (large hinges and handles are the giveaway). On the right side is a typical Coppes floor cabinet with a gas burner and oven setting on top. To complete the kitchen there are four wall mounted cabinets. Not much counterspace for the cook to use in meal preparation. A dining table or additional storage cabinets would have been a huge help. My guess is that the building architect designed the size and shape of the space and Coppes Bros. & Zook used some of their existing cabinets to best fit into the space. There is one other building’s kitchen picture in the Coppes Collection that shows 3-4-inch-wide filler strips along the walls to completely cover the wall space instead of making a custom size larger cabinet, don’t see that in this kitchen. 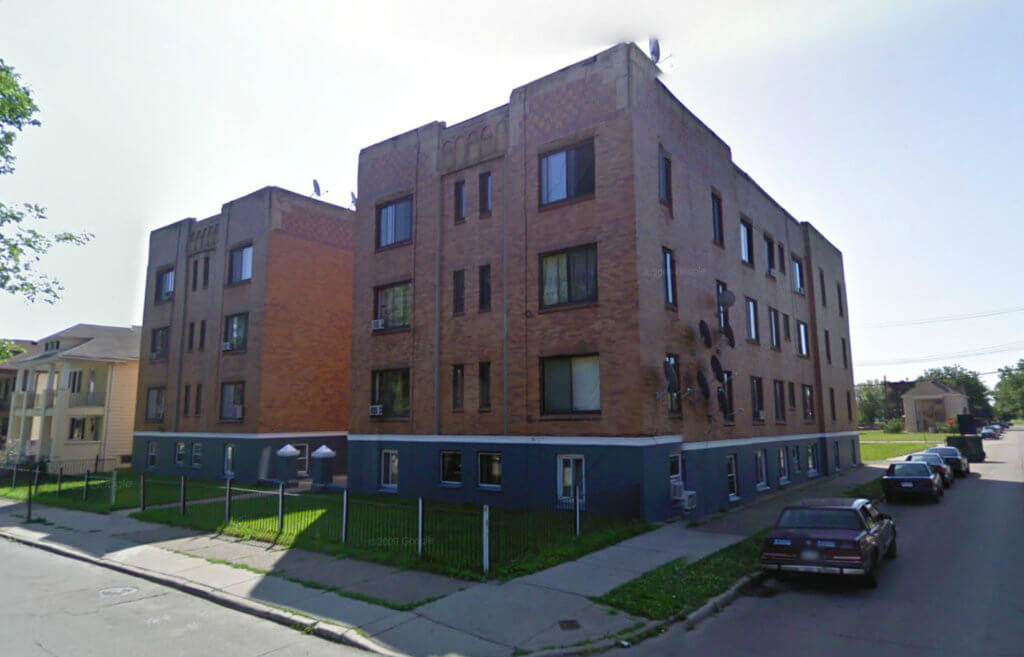 The third picture is one I took from Google maps. It is the same building from almost the same camera location but taken within the last ten years. Makes me wonder if any parts of the Coppes cabinets are still in the building, or have they all been replaced? 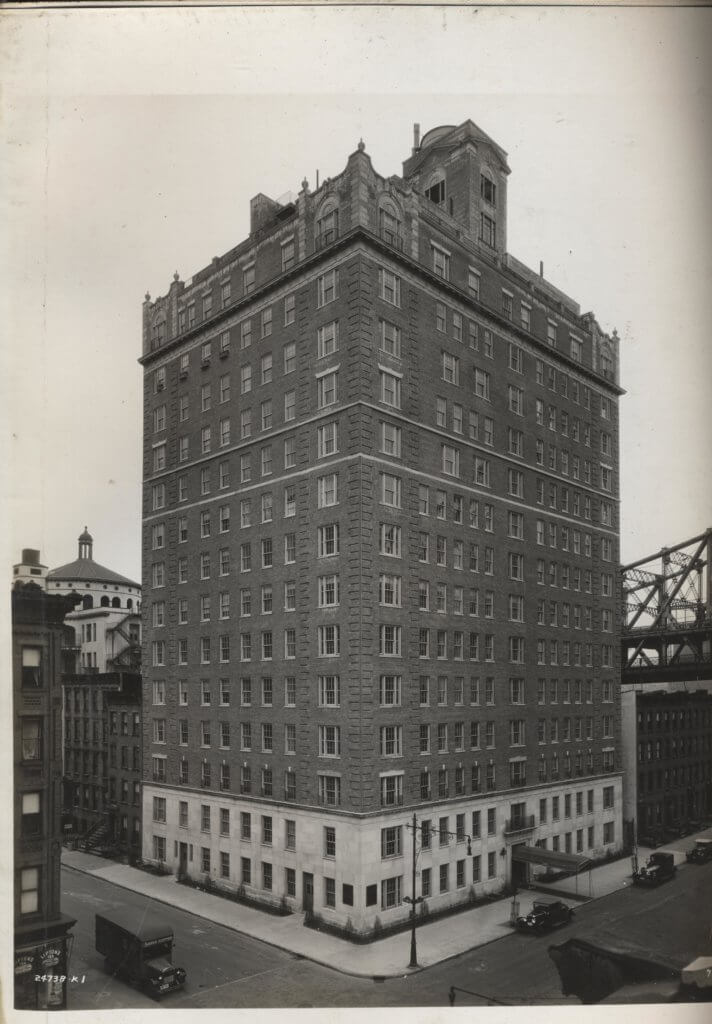 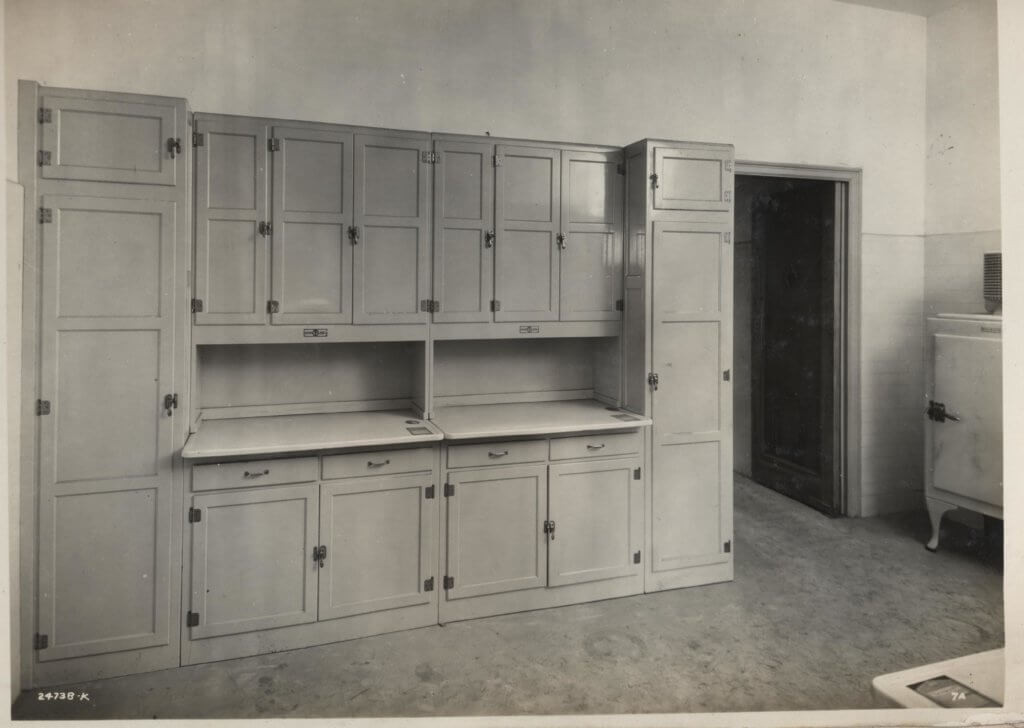 Coppes Bros. & Zook had a sales office in NYC to deal with the building demands for new kitchen cabinets. This particular building is huge by Nappanee standards, but typical in NYC. Don’t know how many apartments are in this building, and I assume each apartment got the same Coppes Bros. & Zook cabinets. The size of the kitchen is obviously larger in NYC which allows for more cabinets. It appears that in the middle of the main wall of cabinets are two cabinets that are similar to the traditional Coppes “Dutch Kitchenet” style cabinets with side cabinets on each end. Still not custom cabinets by a long way. They were filling the space with cabinets that they were already making. In the lower left corner of the photo, you can see another porcelain top from another cabinet on the other side of the room. The New York City building and the Detroit building were constructed close to the same time period, with the Detroit kitchen looking small and tacky and the NYC kitchen looking more inviting. Different designers, different building standards, different desires of the housewife, different standards of living, all these things could be the reasons for a larger and better kitchen in New York City. Welcome to apartment living in the 20s.

It’s time to invite questions and or queries on subjects relating to the Coppes history. I’m hoping you have several questions on your mind. Send them to me at  Bill@coppescommons.com   ,and I will try to answer them.  Maybe we will give a prize to the best/most difficult question? Stay tuned in to this spot.  Plus don’t forget my motto: History makes you smart, Heritage makes you proud!