I have two goals this week. The first goal is to remind you to think about my Motto: History makes you smart —Heritage makes you proud. My second goal is to talk about the method that Coppes Bros., & Zook used to sell their Dutch Kitchenete Cabinets in the mid-1920s. I’m using pictures of newspaper copy that Coppes provided to stores to illustrate how well thought-out their methods were.

Coppes Bros., & Zook had over the road salesmen to sell the cabinets but the salesmen did not carry “salesman’s sample” cabinets. Instead, what each salesman did carry was a folder/book of newspaper copy samples and pictures of items that were intended to help make a sale.

Here is a copy of the sample newspaper advertising that Coppes offered to stores to use in a local newspaper. Just add the correct store name and location. 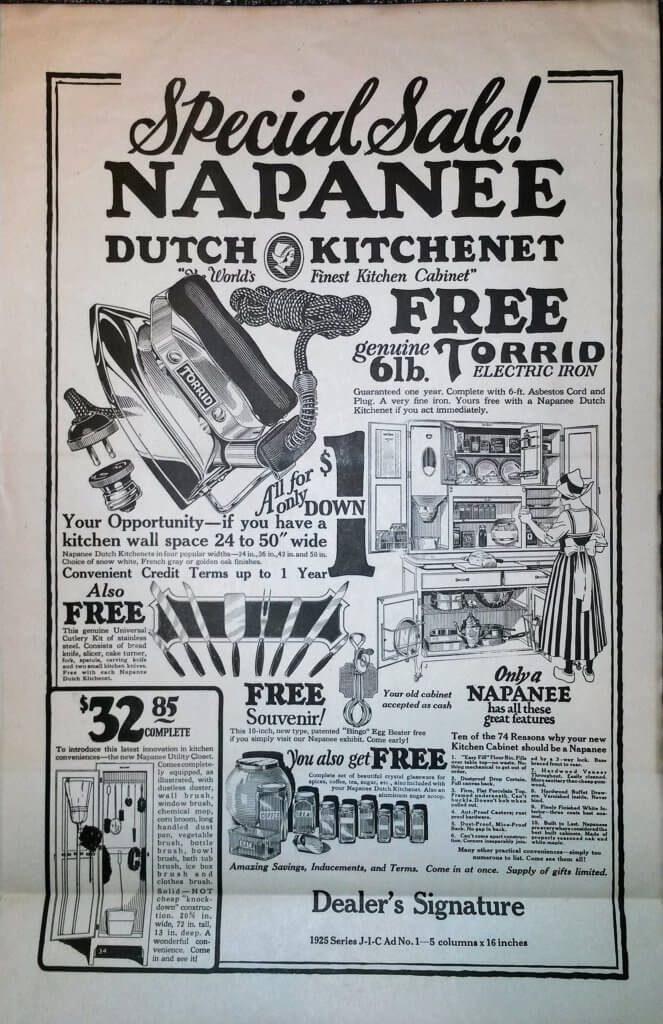 As the salesman approached a store with enough floor space and try to convince them to hold a Napanee Cabinet sale in their store, the salesman could show examples of the egg beater that each person would receive free just for visiting the cabinet display, also show a photo of a sample store window promoting a Coppes Kitchen Cabinet Sale. Large stores, smaller stores, city stores, country stores it didn’t make much difference. Each store had the potential to have a great Napanee Dutch Kitchenet sale. To help insure a great sale in each store the Coppes Bros, & Zook Company was prepared to offer heavy discounts on the cabinet price to the stores, even going so far as to offer further discounts and two free cabinets if a store ordered a full train car load of cabinets in preparation for the sale. Coppes also provided a “Coppes person”, sometimes a married couple to be in the store during the 3-4-5-day sale to help with selling the Napanee Cabinets. That alone would be a huge benefit to the stores.

We have, in the Coppes paper collections letters from several large furniture stores in bigger cities telling of the great success they had selling the Coppes Napanee Line of cabinets. It is not unusual for these letters to say they sold more than 100 cabinets in a 3-4-day period during their Napanee Dutch Kitchenet sale. 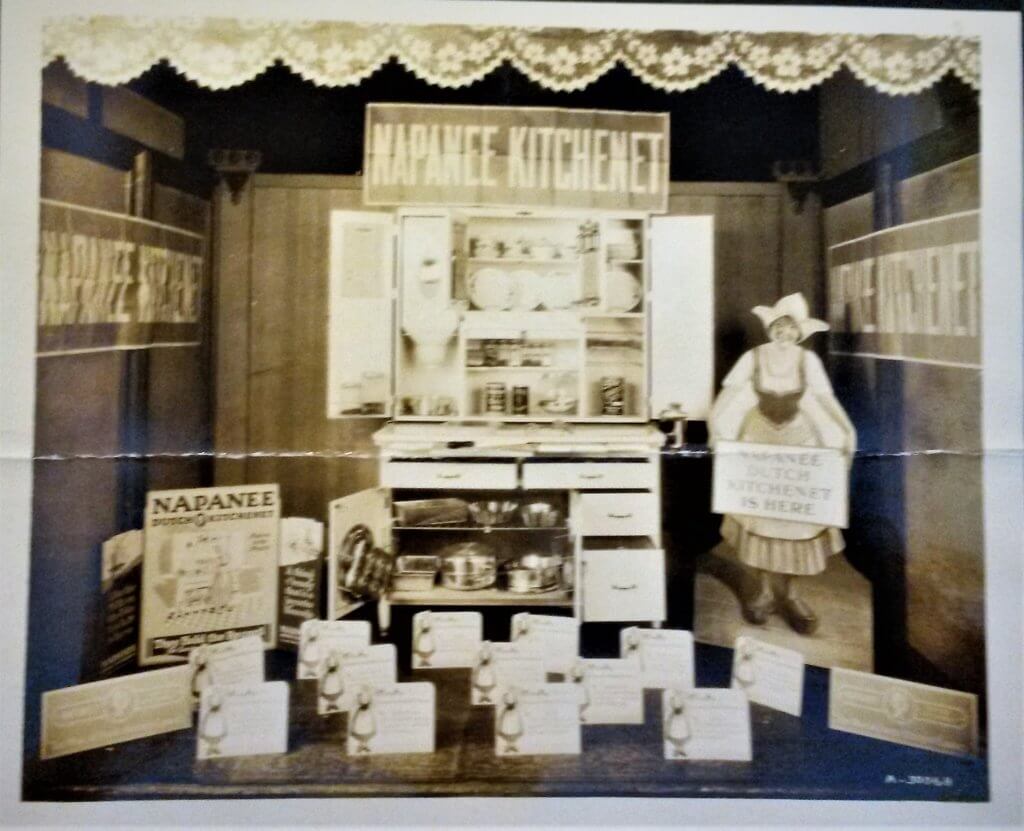 Here is a photo of a sample store window display that a salesman could show to a prospective store owner. Notice the prominent display of the Dutch Lady in the window. All the smaller cards on the floor had a picture of the Dutch Lady on them along with a printed promotion about the cabinets. The Coppes Bros., & Zook Company supplied all the paper/cardboard advertising, including tin signs to tack on trees leading into town.

Besides the free egg beater that was given to everyone who visited the display, there were other free incentives with the purchase of a Napanee Dutch Kitchenet; an electric iron, sets of china dishes, universal cutlery sets. Other newspaper ads. offered canned goods and crystal glassware or an aluminum sugar scoop. How could anyone resist the sales opportunity presented to them? All of this for only one dollar down and one dollar a week. This sales scheme would keep the customers coming back to the store each week to make their weekly payment, and when they were in the store maybe they would see something else to purchase. Good for the store’s bottom line.